‘You will be shocked’: Rami Malek speaks on his Bond villain 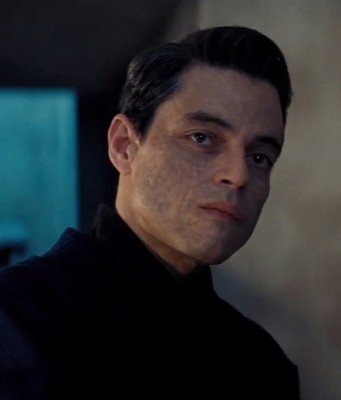 What motivates a memorable Bond villain? Rami Malek has dropped strong hints that his mysterious villain Safin will be a baddie driven by a hunger for vengeance in the new 007 movie No Time To Die.

Speaking in an interview given in September, and published in the new December, 2020, issue of GQ (British edition), the award-winning actor revealed that he had embraced the offer to star in a new 007 film with relish: ‘Look, there was no way I was going to say no. It’s a 007 film, man. They’re part of our cinematic history’.

He said that the fact that it would be James Bond star Daniel Craig’s final adventure as 007 only added to the appeal: ‘An opportunity to go toe-to-toe, head-to-head with Daniel and give them all I got? That’s something I’ll look back on as as big as it gets’.

Driven by a sense of vengeance, Malek’s villain Safin is a baddie more at home in horror thrillers than a spy film: ‘We really did sit down and think about what would truly frighten us, what would send a real panic into our hearts. It’s that sense of dread that sets it apart’.

A View on a Thrill

Interestingly, Malek told GQ that, watching the Bond films since he was a child, he believes that Dr. No is the best of the Bond villains, and he especially loves the scene where Joseph Wiseman’s Julius No calls Sean Connery’s Bond ‘a stupid policeman’. Malek confirmed he was aware of the internet rumours surrounding Safin, which claim he is a 21st-century incarnation of Dr. No: ‘Yes. That’s interesting. I’m not going to bite on that, but I do think it’s interesting. They’ll just have to wait and see’.

Malek also clearly enjoys these rumours and others, and realises the great publicity value of such speculation: ‘Let the rumours fly, because no matter what you expect from this movie, you will be shocked when you watch the film. I will not add any fuel to that fire’.

The GQ interview with Malek also has contributions from Craig, the NTTD director Cary Fukunaga, and storyline writer Phoebe Waller-Bridge, who contributed dialogue and other work to the new movie’s script. Craig said of Malek’s baddie: ‘He understands the weight of what he’s playing. He understands he’s playing a Bond villain – what that means, what it means historically and the kind of Bond villains that have come before. Rami’s really good at his job. I mean, that’s an understatement’.

The new December issue of GQ magazine (British edition), priced GBP £3.99, is on sale now at all large UK retailers.