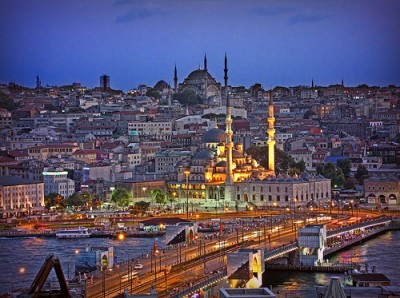 The day before the ‘Skyfall’ main cast and crew were due to fly out to Turkey, co-producer Michael G. Wilson held a press conference in Turkey to deal with claims made in the Turkish media about the recent Second Unit filming in Istanbul.

The ‘Skyfall’ Second Unit recently moved filming to Istanbul after completing the first leg of shooting in the southern province of Adana. Two of Istanbul’s busiest and most crowded neighbourhoods, Eminonu and Sirkeci, are being utilised for the latest shooting in Turkey’s capital city. The historic Post Office in Sirkeci has been completely repainted, and various motorcycle action stunts, using stunt-doubles, have already been filmed in the streets in and around the famous Grand Bazaar. Some motorcycle stunts have also been filmed on top of buildings at the Bazaar. On April 17, for example, two stuntmen rode motorcycles across the top of roofs at the large market, watched by a considerable number of curious shop owners.

The press call, which took place on the morning of April 21, was held by the Bond producer to address a number of claims carried by Turkish newspapers (and subsequently reported by Reuters) that some ‘Skyfall’ stunt filming, using motorbikes, had led to some damage to local buildings. There have been allegations, for example, that a 400-year old building on Aynacilar Street, near a Jewellery shop in the iconic Grand Bazaar, was damaged on the first day of the Istanbul filming. The Jewellery shop owner even called the local police to complain.

There have also been further (anonymous) claims that the Second Unit production team had damaged tiles at the Bazaar, rumours that have already been strongly denied by a member of the Grand Bazaar Artisans Association, who said the tiles had already been damaged in the last restoration in 1983.

Wilson opened his remarks at the press conference by expressing his great happiness to be in Turkey, and also said he would like to thank the Turkish Ministry of Culture for all the invaluable support they have provided. He said EON have filmed in a number of countries in the past and have always left a good impression, and he wanted to reassure Turkish people that the rumours about serious damage to buildings, roofs and tiles were completely unfounded.

Wilson emphasised during the conference that, despite media claims that rooftops in the Grand Bazaar area had been damaged, the film-makers were actually creating ‘an illusion’, which is part of the film-making process, and the ‘damage’ was not real. The roofs and tiles there had appeared to be damaged, but were not really. The film team’s special FX people had been extremely careful. They had removed tiles across a 100 square metre area for the shooting, and replaced them temporarily with special plastic ones brought into the country from Britain. The temporary plastic tiles were also supported with special silicone materials so that there was no damage to the roof area.

The main cast and crew of ‘Skyfall’, including Daniel Craig and director Sam Mendes, are due to arrive in Turkey on April 22, and it is thought the filming for the movie will continue until May 6.