Welcome to hell again, Blofeld: The ‘Diamonds’ ending that never was 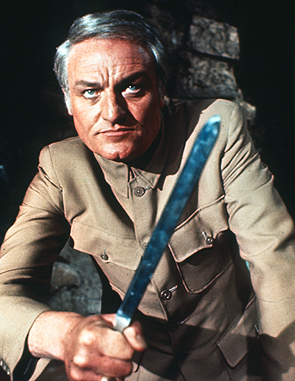 In the pre-credits to Sean Connery’s final EON James Bond movie, Diamonds Are Forever (1971), 007 thinks he has disposed of SPECTRE head Ernst Stavro Blofeld by pushing him headfirst into a large pool of boiling mud: ‘Welcome to hell, Blofeld’. It was a scene partly inspired by a sequence about a mud bath in Ian Fleming’s original novel of 1956.

Later in the film, our hero appears to finally kill Blofeld for good by using a crane to smash the sleek ‘Bathosub’, the SPECTRE villain’s one-man mini-submarine, into the side of the control room on top of the oil-rig, although the canny film-makers (perhaps with an eye on his future return) did not actually show Blofeld’s death.

But it is not often realised that there was another ending originally envisaged for the main villain in the movie: Ernst Stavro Blofeld nearly came to a glittering end (so to speak), buried in crystals of sodium chloride – more commonly known as salt!

After the Fleming-esque realism and sombre tone of On Her Majesty’s Secret Service (1969), various ideas were toyed with for the next 007 adventure. There was a lot of pressure on EON from United Artists to try and go back to the successful formula of Goldfinger, with its larger-than-life glamour and greater emphasis on ‘fantasy’. The Goldfinger director Guy Hamilton (1922-2016) was also recruited to helm the movie. An early version of the screenplay to Diamonds Are Forever (DAF), penned by Richard Maibaum (1909-1991), had even envisaged the return of Gert ‘Goldfinger’ Frobe playing Goldfinger’s twin brother (!), who would be a shipping magnate complete with a laser beam mounted in a supertanker (one of the lines of dialogue ran: ‘I think you knew my brother Auric’). However, at the urging of Cubby Broccoli (and apparently based on a dream the EON producer had experienced about his reclusive friend Howard Hughes being replaced by an imposter), the ‘Goldfinger II’ idea was dropped in favour of the return of Bond’s evil nemesis Blofeld.

For this, and at the insistence of Harry Saltzman, the distinguished character actor Charles Gray (1928-2000), who had a small role as Bond’s contact in Japan, Dikko Henderson, in You Only Live Twice (1967), was called back to the franchise, much to his surprise, but also to his evident delight. Gray offered a smooth, aristocratic and disdainful interpretation of Blofeld in the movie (perhaps influenced by the delusions of grandeur held by the High Castle-based Blofeld of Fleming’s novel You Only Live Twice), and was originally going to be killed off on screen in a more gritty and ‘physical’ climax to the DAF plotline, a tough confrontation that would have been carefully planned out by the DAF stunt arrangers Bob Simmons and Paul Baxley. The clear intention was to show a more ‘animal’ side to the pretentious version of Blofeld on display earlier in the movie, as he now desperately seeks to outwit Bond and escape his dogged pursuer.

In fact, the screenplay for Diamonds Are Forever by Richard Maibaum had seen considerable input and rewriting work by Tom Mankiewicz (1942-2010), who had been hired at the suggestion of United Artists President David Picker, the man who had been instrumental in persuading Sean Connery to return for the seventh EON adventure. It was felt that Mankiewicz could add some witty dialogue and better pace to the DAF script.

Fascinatingly, the climax to the movie in Mankiewicz’s original script was not to have ended on the oil-rig. The original ending had envisaged Blofeld successfully escaping from the oil-rig in his Bathosub, with Bond in hot pursuit; Bond has spotted the Bathosub in the water and dives off the oil-rig into the sea, and manages to tie the long rope of a large weather balloon to the conning tower of Blofeld’s mini-sub. As the sub speeds off under the  water, Bond is able to ride along on the surface by perilously holding on to the weather balloon.

When Blofeld arrives at his destination, a beach in Mexico where he thinks he is safe, he is suddenly startled to find that Bond has followed him by hanging on to the balloon! Mankiewicz wanted Blofeld to quip something like ‘Mary Poppins, I presume’ and to shoot down Bond’s balloon. Bond would have fallen into the sea and the two men would have made a run for the shoreline. The chase would have climaxed in the two men reaching land and desperately climbing over hills of pure white salt at a working salt mine, with Blofeld eventually falling to his death in a salt granulator.

The owners of the salt mine chosen by director Guy Hamilton were not keen on having film-makers around, and refused permission for their mounds of salt and industrial plant to be used. Hamilton, who was also under tight budgetary and time constraints (mainly due to the tough financial deal negotiated with Connery), also reluctantly decided that the sequence would have been too long.

It is interesting to note that Mankiewicz, in a sense, reworked some of the tough and physical ‘Bond versus villain’ concept into an early version of his screenplay for The Man With The Golden Gun (1974) but – again – the thrust of this ended up being somewhat watered down in the final version of the movie.

Tom Mankiewicz spoke in an interview given later in his career about his original vision of Blofeld for DAF, which was of a suave but still lethal villain, and hinted at his disappointment at the version that ended up in the final cut: ‘I saw Blofeld as such an elegant fellow, and they’d had two different Blofelds already. Charles Gray is the least physically pre-possessing Blofeld. Donald Pleasence had a big scar; Telly Savalas is certainly a menacing presence. And Charlie Gray, sort of flitting around in that penthouse, was more like Louella Parsons than Blofeld’.

Louella ‘Lollypops’ Parsons (1881-1972) was an actress and Hollywood gossip columnist, notorious for her flamboyant but cutting remarks. 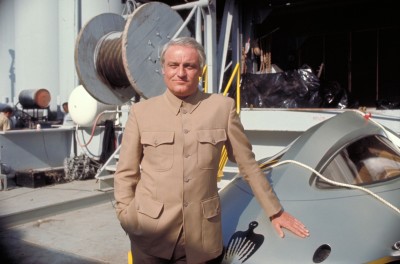 Charles Gray (Blofeld) poses on set with his DAF Bathosub