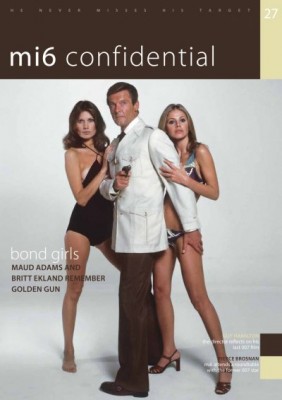 Two new issues have just been published of the glossy and very popular MI6 Confidential magazine, a must-have publication for dedicated 007 fans, and both are now available to purchase through the JBIFC.

Issue no. 27 offers a reassessment of Roger Moore’s second James Bond film The Man With The Golden Gun (1974), as it celebrates its 40th anniversary. This is a movie which still brings quite mixed reactions from both 007 and general film aficionados but, as this issue illustrates superbly, there are many good things about the film.

The special issue includes an interview with the director Guy Hamilton, interviews with both of the main Bond women in the movie (Maud Adams and Britt Ekland), and a talk with the late cinematographer Oswald Morris.

There is also a chance to read about the career and thoughts of American actor Clifton James, who reprised his role of Louisiana Sheriff J.W. Pepper for the movie, having first appeared in Live and Let Die (1973).

Issue 27 also profiles both the printed novel and comic-strip versions of Ian Fleming’s fifth 007 adventure From Russia, With Love (1957), while Pierce Brosnan fans can read an interview with the former four-times Bond about his latest spy movie, November Man. 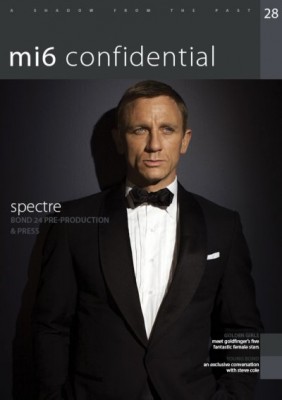 Issue no. 28 of MI6 Confidential explores the recent launch and press-call for Bond 24, held on 4th December at Pinewood Studios, where the world discovered the title of the latest Daniel Craig adventure: SPECTRE.

The magazine carries some lovely souvenir photos from the eagerly-awaited events of that morning, when director Sam Mendes revealed the title, the movie’s special logo design, the new Aston Martin DB10, and – last but not least – the new stars of the latest 007 movie.

The special SPECTRE issue also includes a detailed exploration of the ‘Road to the production’ of the new 007 film, and a profile of Aston Martin’s new DB10 car, which was specially designed in conjunction with the 007 movie-makers.

Issue no. 28 also contains a tribute to Goldfinger (1964), including a profile of acclaimed set-designer Ken Adam, the ‘Man with the midas touch’. Readers can also find out more details about the new ‘Young Bond’ adventure, Shoot To Kill, penned by author Steve Cole, which recently hit bookstores.

Issues no. 27 and no. 28 of MI6 Confidential can be purchased from the online store.

Christmas is coming – why not treat yourself to some extra presents, 007-style.