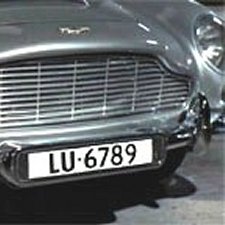 Are you a budding Auric Goldfinger? Do you have a spare £20 million? A large unofficial James Bond vehicles collection, owned by collector Michael Dezer and currently located in north Miami in the USA, has been put up for sale through a UK-based sales agent.

Dezer, a real estate developer who built up a fortune both through his New York-based company Dezer Properties and also later on by buying up ocean-front properties in Florida, built up the unique collection of 60 James Bond vehicles and other 007 memorabilia after acquiring material from other private collections. This included the sadly-missed former ‘Cars of the Stars’ exhibition collection, which was once based at Keswick, Cumbria, in the UK.

Now, however, it would appear that Dezer’s unofficial Bond vehicle collection in America has not generated as much income or public interest at its current location as he had hoped, and the multi-millionaire has decided that the unique collection ideally should be re-located back to Europe.

Interviewed in the ‘Driving and Technology’ section of the UK’s Sunday Times newspaper (February 16), Dezer revealed that he is selling the collection, which is comprized of over 60 vehicles and other memorabilia from the James Bond movies, as a single lot for £20 million. The hope is that a British buyer may be found, and the collection will return back to the UK.

Dezer told the Sunday Times: ‘I wasn’t necessarily a huge fan of James Bond; I just liked the movies. Now I think the cars belong in England’. He also said of the associated memorabilia that goes with the collection: ‘Those are amazing, worth a lot just by themselves – 60 years of posters, T-shirts, books, games, watches, sodas, juke-boxes, you name it. We have all the original books, six or seven sets in different sizes. Old books are now very collectable’.

But, as the Sunday Times noted in its article, it is the vehicles that are possibly the jewels in the crown from a movie fan’s point of view. These gems include the Fairey Huntress boat involved in the chase scene in From Russia, With Love (1963). Moreover, no less than six Aston Martins, including one from Goldfinger (1964) and the DBS from On Her Majesty’s Secret Service (1969), are part of the collection. There is also a road-going version of one of the white Lotus Esprit vehicles used in the making of The Spy Who Loved Me (1977).

Other unique parts of the collection include a full-size replica of the Lockheed JetStar from Goldfinger, a hovercraft from the pre-credits of Die Another Day, and the Ford Mustang driven by Sean Connery in Diamonds Are Forever. There is also a Tuk-tuk vehicle from Octopussy, which helped Roger Moore’s 007 escape through the streets of Delhi, and a BMW R 1200 motorbike from Tomorrow Never Dies, used by 007 and Wai Lin.

Dezer told the Sunday Times that he will be sorry to see some of the items go, including the T-55 tank from Goldeneye, which he said is ‘special’. He added: ‘And I really like the DB5, the Aston Martin. It’s a very, very good car with all the gadgets’. He also said the ’37 Rolls-Royce Phantom from Goldfinger is a ‘nice one’.

The vehicles have all been maintained by a mechanic who Dezer recruited from the UK, and the collection was housed mainly at the Miami Auto Museum, where Dezer has also stored his wider collection of famous Hollywood cars. Dezer revealed, however, that his Bond exhibit has not been as popular as he had hoped. He claimed: ‘People know and like the Bond movies in America, but they aren’t as big as they are in England’.

The Sunday Times article was illustrated with a cartoon of the ejector seat from the Aston Martin DB5 being pressed into action, shooting a bidder through the roof and into the air, as he cries: ‘I take it you think my bid is too low!’

‘Bond in Motion’ arrives in London

The officially-sponsored ‘Bond in Motion’ exhibition, the largest-ever official collection of James Bond vehicles, which proved such a smash-hit when it went on display at the Beaulieu National Motor Museum in the UK, is being transferred to a central London location.

The exhibition will open at the London Film Museum from 21 March, 2014.

And, as an extra treat to mark the event, ‘Bond in Motion’ will put on display for the first time the Agusta Westland AW101 helicopter used in the filming of Skyfall.

There are also some plans in the pipeline for some special guests to help launch the London opening. Keep an eye on: www.londonfilmmuseum.com