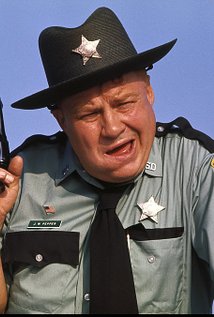 The JBIFC is very sad to report that actor Clifton James, who played Sheriff J.W. Pepper in two James Bond movies during the 1970s, has passed away, aged 96. He died on Saturday, 15th April, in Gladstone, Oregon, USA, due to complications from diabetes.

Clifton James appeared as the incompetent but well-meaning Louisiana Sheriff J.W. Pepper in Sir Roger Moore’s debut 007 movie Live and Let Die (1973), directed by Guy Hamilton, and he made such an impact on cinema audiences that he was asked to reprise the role in the next James Bond adventure, The Man With The Golden Gun (1974).

There have been a number of very warm tributes from his family, friends and fellow actors. His daughter Lynn, speaking to the media on behalf of the family, said of her father: ‘He was the most outgoing person, beloved by everybody’. She added that they had been ‘incredibly blessed’ to have had him in their lives.

Former Bond star Sir Roger Moore, paying tribute on Twitter, commented: ‘Terribly sad to hear Clifton James has left us. As J.W. Pepper he gave my first two Bond films a great, fun character’. Clifton added light comic relief to sequences set in Louisiana in Live and Let Die and in Bangkok in The Man With The Golden Gun.

Clifton James was a highly-decorated soldier who had served with the U.S. Army in the South Pacific against the Japanese in World War Two. His acting career spanned five decades, and included films, TV and highly-praised performances in several Broadway shows. His last film credit was the 2006 comedy Raising Flagg.

Clifton’s contribution to Live and Let Die started on Day Ten of the movie’s location shooting in Louisiana, when he was filmed leading five cars in a high-speed chase down Louisiana’s Highway Eleven. His brash, red-necked character Sheriff Pepper gets the shock of his life when two jet boats zoom from one stretch of the bayous to another stretch of the water, cutting across the road and straight in front of the Sheriff’s speeding patrol car.

It was a highly complex stunt that had involved much preparation and rehearsal. And Clifton James pitched his character’s response at just the right level of shock and bewilderment, much to the bemusement of his fellow police officers in the film (and, apparently, on the set). His character’s continued outrage provided some light comic relief in what proved to be a lengthy boat chase sequence in the movie.

Pepper’s reappearance in The Man With The Golden Gun also came during a boat chase sequence involving 007, but his character also ended up in Bond’s (borrowed) car when 007 is in pursuit of villain Scaramanga, a sequence which included the famous barrel-role stunt over a broken bridge. 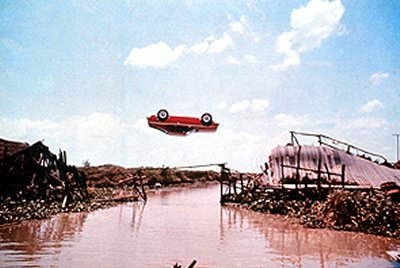