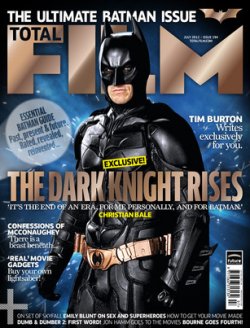 The new issue of the British movie magazine ‘Total Film’ has a short report from the set of ‘Skyfall’, with comments from Daniel Craig and also from the movie’s armourer, Joss Skottowe.

The magazine (July 2012), which has just hit British news-stands and retail outlets, was able to visit the set of ‘Skyfall’ at Pinewood on day 95 of the shoot. During a break in filming an explosion at Temple tube station in London (recreated on the famous 007 stage), Craig told the visitors to Pinewood: ‘The talent we’ve managed to pull in this movie is phenomenal. You play football, you play with the best people, and then your game improves’.

On his co-star, Javier Bardem, Craig also commented to the magazine: ‘Javier’s one of the best in the business. I’ve had to raise my game to work with him’. The Bond star also praised his two female co-stars, Berenice and Naomie, who, he said, were playing two very different characters.

Interestingly, the short article also carries an interview with Joss Skottow, the man responsible for the guns used on the new 007 movie. Skottow told the magazine: ‘We’re using some 400 or 500 weapons on Skyfall – some are metal, some are rubber. But 90 per cent of all the guns we use are converted. They start out as real guns and we convert them to fire blank ammunition’.

Skottow said there was a wide range of guns being used on the film, ranging from hi-tech weaponry to old antiques. Intriguingly, he revealed that the character ‘Kincade’ in the movie, played by Albert Finney, ‘has a nice gun collection!’