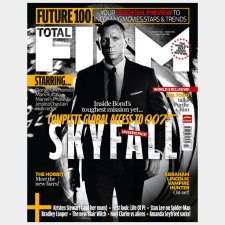 The new issue of the popular British movie magazine ‘Total Film’ has an article on the making of ‘Skyfall’ and a Daniel Craig front cover.

The magazine (issue no. 195), which has just hit news-stands in the UK, has a mean and moody-looking Daniel Craig as 007 emerging from the gunbarrel (or an underground tunnel?) on the front-cover. The 6-page feature article on the new Bond movie inside the magazine also includes a new still of a bearded 007 sitting in London’s National Gallery, with classic oil paintings in the background.

The ‘Total Film’ team were able to visit the ‘Skyfall’ set when the film was being shot in a market-place in Istanbul and also at Pinewood Studios in England. The article includes a brief history of the background to the making of the new movie (which, at one point, was put on hold due to MGM’s financial difficulties), and reveals that Daniel Craig commented on the hold-up: ‘I think it helped’. He continued: ‘The MGM thing was a silver lining situation where, for the first time, we had a lot of time to work on the script’.

The magazine’s team were also able to speak to director Sam Mendes, new Bond villain Javier Bardem, and Bond producer Barbara Broccoli. Mendes was keen to dispel rumours that he is making an ‘art-house’ Bond movie. He said that, like any movie, he wanted it to be seen by a maximum amount of people: ‘It’s actually quite reassuring to be working on something, finally, where I don’t have to worry about the artistic content above and beyond everything else!’

In fact, ‘Total Film’ noted that Craig, Mendes, and Barbara Broccoli were all keen to assure fans that ‘classic’ Bond is back. Broccoli said: ‘My father always said to me, “If you get in trouble, go back to Fleming”. People are always looking for heroes’.