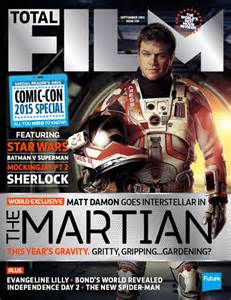 The new issue of the popular British movie magazine Total Film (September, 2015), which has just appeared on retail shelves, has a special 6-page feature covering the expanded Bond ‘universe’.

The magazine’s special series ‘The Bigger Picture’ discusses the Bond books, comics, films, videogames, cars, and toys, and even has an affectionate section on the spies ‘who spoofed him’ (such as the ‘Carry On’ team, the rogue 1967 Casino Royale, the Italian Operation Kid Brother, and so on).

With a commentary written by Neil Smith, the Total Film article points out that Ian Fleming could not have foreseen the ‘global phenomenon’ that James Bond was to become, and the Bond author’s original books now ‘only scratch the surface of a world that seems to grow exponentially with the release of every new Bond film’.

Starting with what has been called the ‘Bondmania’ of the 1960s, there has been a mass of tie-ins, spin-offs, literature and merchandise (and, as ‘Q’ might say, that’s putting it mildly, 007).

To take just one example, in the fallow period between Licence to Kill (1989) and Goldeneye (1995), when the producers of the Bond movies were caught up in a lengthy legal case over a contentious buy-out of MGM/UA, someone had the idea of a TV cartoon series based on 007’s previously unmentioned nephew! The result was James Bond Jr., which Smith calls a ‘hyperactive and largely nonsensical spin-off’, but he also notes that it nevertheless ran to 65 episodes.

Similarly, when it comes to Bond comics, Smith notes that Bond’s graphic history ‘is a story in itself’, which kick-started with Bond’s first appearance in strip form in the Daily Express in the late 1950s, has gone through various incarnations over time, and will see a new graphic 007 this coming November, when US imprint Dynamite Entertainment will publish their new version of James Bond (after they signed a 10-year deal with Ian Fleming Publications in 2014). This latest visual interpretation of Bond in comic form promises to see the ‘original, brutal’ Bond back in action.

The Total Film appreciation of the Bond universe also explores some other aspects of the EON films and (for Bond vehicle fans) looks briefly at the cars of 007, culminating in the new Aston Martin that will wow audiences in the upcoming and eagerly-anticipated Spectre.

In the Daily Express comic-strip version of Octopussy, which was adapted by Jim Lawrence and drawn by Yaroslav Horak, and appeared in the newspaper from November 1966 onwards, much of Ian Fleming’s original story was retained in the strip, but it was also expanded by the addition of Oberhauser’s daughter, Trudi, together with a new plot element involving the smuggling of gold in coffins.