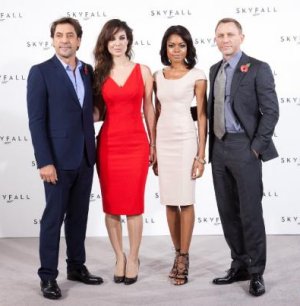 The official James Bond website, 007.com, has released three new ‘Skyfall’ interviews with principal members of the cast, together with the first full set of official stills from the new movie.

In Craig’s interview, he reflected on Bond’s experiences in the movie: he said that ‘Bond is doing his job’, but then the world is ‘turned upside down’ by Bardem’s super-villain, and so 007 has got to address his relationship with ‘M’. Bond also has other relationships with the characters played by Naomie and Berenice in the movie. Craig said he is ‘very excited’ about the film.

Javier Bardem, in his contribution, emphasised that it is a great movie to belong to and he is also ‘very excited’ about his role: ‘the cast, the story, the character, everything is very powerful’. Bardem also referred to the 50th Anniversary of the Bond series.

Berenice Marlohe’s interview also adopted a similar tone. She pointed out that it is ‘completely unique’ for a movie series to last so long, and that she has now got to know ‘the family’ around the movie. She said that she appreciated and ‘felt moved’ about the unique position she has in being part of the 50th Anniversary of the series.

The official website has also released a breathtaking set of official stills from the movie, including some behind-the-scenes photos of Craig and Dench, and also the first official glimpse of Ralph Fiennes in action. The new official photos will wet the appetite of James Bond fans everywhere.