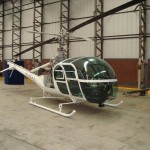 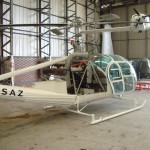 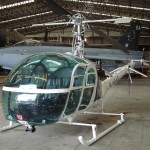 The Story of G-ASAZ, The Hiller Helicopter used by Goldfinger to transport the atomic bomb to Fort Knox

In 1960 rolling off a factory production line of the Hiller Aircraft Corporation in California USA was a brand new aircraft. Then only known by a construction number of 2070, [private]a star had been created with a touch of magic. Gaining a UK certificate of registration in 1962, aircraft number 2070 became known as G-ASAZ, a registration mark that would spark pizzazz. From that year until 1968 ownership lied with Rent-A-Copter Limited of Lowndes Street, London.

Less than a year later in 1963, G-ASAZ launched her film career with a debut appearance in movie ‘The V.I.P.s’, alongside were her Hollywood co-stars Elizabeth Taylor and Richard Burton.

Prefering the limelight to a cold dark hanger it was no more than a year on before we see her adorn the silver screen again, this time in the 1964 blockbuster Bond movie ‘Goldfinger’.

Like so many bands in the sixties who topped the charts with one hit and were never heard of again, G-ASAZ was to fall into the shadows.

For the next 35 years G-ASAZ was to fleet between many different owners and lead a relatively uneventful low profile life in service.

An unforeseen come back tour was just around the corner though.

As 1999 spelt an end to a millennium, it was a new beginning for G-ASAZ. Present owner Robert Hields of Hields Aviation met Yorkshire Air Museum’s Director in Elvington at a Special Air Service Dinner.

It was suggested over the course of the evening that an airworthy classic aircraft could well serve the museum with public transport operations. And so the project began !!

Firstly a suitable machine had to be found and by chance Mr. Hields spotted the non-flying G-ASAZ at a facility in Bedford. G-ASAZ had been neglected but was still able to project her potential to her prospective buyer and her star-studded history helped capture the imagination of Robert Hields.

Hields Aviation embarked on restoring G-ASAZ back to her place in the skies, a mission that was to take 4 years.

Finally rebuilt and in ‘Royal Navy’ livery she soon again attracted attention from the television talent scouts. Yorkshire Television quickly cast her for roles in episodes of ‘Heartbeat’ and ‘The Royal’

Her latest screen appearance being in an episode of ‘The Royal’ that just premiered our screens at the end of 2008.

G-ASAZ once again flaunts her white livery as sported in the Bond movie, transporting her back to youth.

She will tread the boards once more !!