The Spy Who Sold Me 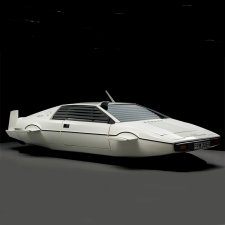 One of the original Lotus Esprit submarine cars used in Roger Moore’s third 007 movie The Spy Who Loved Me (1977) has been sold at auction in South London for just over half a million pounds.

It was the first time that the specially designed and converted white Lotus Esprit S1, known as ‘Wet Nellie’ (in homage to the autogyro ‘Little Nellie’ used in 1967’s You Only Live Twice), has been put up for sale.

The auction, held at RM Auctions in England’s capital city, took place on September 9 and saw the unique 1970s Bond car reach a final price of £550,000, the successful bid coming from a telephone bidder. There was some surprise expressed by auction attendees and media commentators that the car did not realise a higher price. RM Auctions had originally put an estimate on the while Lotus Esprit of £650,000-£950,000.

A spokesman for RM Auctions said it was ‘one of the most iconic cars in movie history’. Indeed, the successful bidder is now in possession of a car that helped propel Roger Moore’s third 007 outing into becoming one of the most successful James Bond movies of the 1970s.

There was a great deal of secrecy over the car during the early stages of production of the 1977 movie. It was even code-named ‘Esther Williams’ in an early version of the script. Closely following the design plans of the hugely talented team of 007 Production Designer Ken Adam and Special Effects supervisor Derek Meddings, who wanted a ‘wet submersible’, the submarine version of the car was built by Perry Oceanographics of Miami in Florida, USA, a specialist underwater engineering firm that had built underwater craft for the U.S. navy.

The sequences with the underwater Lotus were filmed in the clear waters of the Bahamas by expert underwater cinematographer Lamar Boren, with model work with minatures and other Lotus body shells carried out at studios in Britain.

Lotus sales increased enormously after the release of the movie, and the demand was such that eager purchasers had to endure a three-year waiting list. Sir Roger Moore has said in interviews that The Spy Who Loved Me was his favourite and most enjoyable 007 film.