The Spy Who Loved Cool 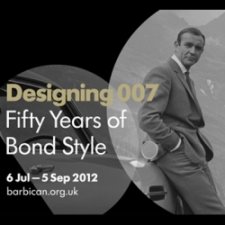 Anticipation over the new ‘Designing 007’ exhibition at the Barbican is building nicely, with another article appearing in the UK press.

In an piece entitled ‘The spy who loved to look cool’, published in ‘Radar’, a supplement to the UK’s ‘Independent’ newspaper on June 30, journalist John Walsh interviewed the Barbican’s general director Nicholas Kenyon, and also spoke to one of the co-curators of the new exhibition, fashion historian Bronwyn Cosgrave.

Barbican boss Kenyon said: ‘There has been no bigger icon of British design over the last 50 years than James Bond’. Although sceptical about this claim himself, John Walsh still acknowledged in his article that the various incarnations of James Bond ‘could always be found being heroic in cool suits’, being ‘suave with bosomy horizontales’, and electrocuting baddies, all ‘in landscapes full of money and foreign exotica’.

Speaking to Cosgrave, Walsh was also able to give the newspaper’s readers some nice clues as to what to expect if they visit the new exhibition. Cosgrave commented: ‘We hope that when a visitor finishes the show, they’ll understand what has gone into designing a Bond film. They’ll walk in through a gun barrel, enter a golden domain to commemorate the golden anniversary, visit M’s office, look at gadgets in Q Branch, enter a casino, then visit the foreign territories which Bond visited’.

The ‘Q-Branch’ section of the exhibition will trace the design progression of the gadgets from the early sketches of John Stears to the special effects department at Pinewood Studios, where the devices were built and tested. There will also be a room dedicated to Bond villains, while the final room in the exhibition is apparently the Ice Palace from ‘Die Another Day’. There will also be storyboards, design drawings, models, vehicles, and a comprehensive range of costumes from the Bond movies over the 50 years. Cosgrave told Walsh: ‘What fascinated me when I started to examine the films was that the costume designers worked with the best fashion designers. There was always a strong, directional fashion style, from Pussy Galore’s trouser suit – women weren’t wearing trousers back then – to today when Muccia Prada adapts her clothes for the screen’.

Cosgrave pointed out that each Bond film was also ahead of contemporary technology, from Goldfinger’s jet (modelled on Lyndon Johnson’s) to the Ericsson flip-phone used in ‘Tomorrow Never Dies’. The Bombardier Skidoo (a snowmobile), as used in ‘Die Another Day’, was its first appearance before it went into commercial production. Cograve added: ‘I think Bond is still incredibly influential’.