Sir Sam Mendes, the director of two smash-hit 007 films, Skyfall and Spectre, gave an interview to the UK’s Observer newspaper and included some interesting reflections on his Bond years. Sir Sam has been publicising his latest movie Empire of Light (released on 9th January in the UK), which he has both written and directed, and which has already been acclaimed by British critics.

Set in the early 1980s, the new films stars Olivia Colman as Hilary, who manages a grand old cinema, the Empire, in an English seaside town. She faces a number of personal issues as she battles to keep the cinema viable. It is possibly Mendes’s most personal film yet, reflecting his strong love of cinema and the power of visual storytelling. Indeed, as the Observer noted, the story of Empire of Light ‘is a profoundly personal one for Mendes’ – not only was he a culture-obsessed teenager during the 1980s, but he was also raised mainly by his mother, who herself had faced considerable challenges.

Usefully, the interview in the Observer took the form of a series of questions fired at him by friends, former colleagues and readers of the newspaper. And, inevitably, the topic of James Bond was raised at a number of points.

Responding to a question from an IT worker on who he thought might be the next James Bond actor, Sir Sam said: ‘I have no idea. They’ve made it so difficult for themselves for two reasons. One is they turned the franchise into something extraordinary with Daniel Craig. If you think about the actors that might have been up for the role after Pierce Brosnan, a lot of people would have said, “No way”. They would not have even been considered for the role, not wanted to be considered for the role. Now, there’s barely an actor in the world who would turn it down. And that’s because of Daniel and because of what’s happened to the franchise since. So that’s a great thing. The bad thing is he’s dead. You tell me how they get out of that one’. 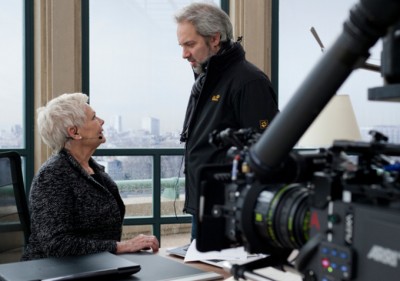 Dame Judi Dench, who played ‘M’ and has also worked with Mendes in the theatre, asked (tongue in cheek) ‘Any work going?!!’ Mendes responded: ‘Always for Judi Dench’. He added that working with Dench was a huge moment in his life. Similarly, a question from Naomie Harris, who played Eve Moneypenny, asked Mendes how he made time for himself while pouring so much into his craft. Mendes explained that it was a constant struggle, but he had got much better at it in the last seven years since meeting his wife (Alison Balsom).

Perhaps the most surprising revelation of the interview, however, came when Sir Sam was asked by Tanya Moodie whether he would ever cameo in his own film? Mendes responded: ‘I do cameo in my films vocally. I am in several movies as a background voice, starting in American Beauty. Or I’m whistling or I’m humming or something. It’s often just timesaving, because you’re in ADR [Automated Dialogue Replacement] and I’m like: “That hum’s not right… Let me go and do the line”. For example, in Spectre Dave Bautista’s character, Hinx, who’s the big henchman, has one and only one word. It’s the last thing he says before he falls to his death – the immortal line, “Shiiiit!” And that’s me, I can now reveal. Poor Dave, he was making another movie, he doesn’t need to be at the end of some remote ISDN line from China or wherever he was shooting to do one word. I’ll do it. Although I’m not actually sure he knows that that’s not him. That’s probably news to him as well’.

Staying on the topic of Spectre, Mendes – responding to a question from his 007 cinematographer Roger Deakins on how much a story changes and evolves during the making of a film – admitted at one point that his second Bond film had been one of the most frustrating movies he had made ‘because I didn’t know how it was going to end when I started shooting it. Starting a movie without knowing what the ending is is not advisable. There should be a health warning on the packet: “Do not direct this Bond movie until you have completed the screenplay”… ‘. Mendes said his movie 1917 had changed very little during production, but Spectre had ‘changed out of all recognition’.

The Observer interview with Sir Sam pointed out that he is not only a film-maker but remains deeply committed to theatre, too. In May, 2023, he will direct a new play, The Motive and the Cue, at the famous National Theatre in London. 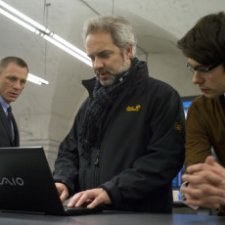