The Living Highlights: Dalton Looks Back 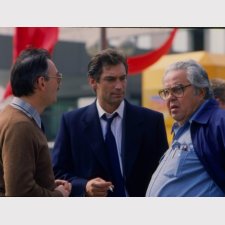 Former two-times James Bond star Timothy Dalton, who has a role in the new gothic horror TV series Penny Dreadful, has given some detailed reflections on his screen career in a new interview, including some interesting comments on his 007 movies.

In probably one of the most detailed interviews he has given in recent years, conducted by Will Harris of the AV Club website, Dalton talked at some length about his various film and TV roles, starting with his ‘breakthrough’ role in the award-winning film The Lion in Winter (1968), through to movies such as the now rarely-seen Permission to Kill (1975), Flash Gordon (1980), his two James Bond adventures, and on to recent roles in the comedy movie Hot Fuzz (2007) and the cult British TV sci-fi series Dr. Who (where he played a Time Lord).

Dalton, who has been helping to promote his role as ‘Sir Malcolm’ in Penny Dreadful (a supernatural drama set in late 19th century London, which is written by Skyfall‘s John Logan and produced by Sam Mendes), explained at the outset of the interview that his part in the new series is that of a man who is ‘obsessive, determined, ruthless, and manipulative… and as you can see, I’m one of the good guys!’

At another stage in the interview, Tim also answered questions about The Living Daylights (1987) and License to Kill (1989), both directed by John Glen. Will Harris noted that the story from several sources is that Dalton was pitched the role of 007 many years before he eventually accepted it.

Turning to his particular interpretation of James Bond, and his desire to be as close to the original Fleming character as possible, Dalton said that the ‘prevailing wisdom at the time – which I would say I shared – was that the series, whilst very entertaining, had become rather spoof-like’. He said it had become ‘too light-hearted’ and producer Cubby Broccoli ‘wanted to try and bring it back to something more like its original roots with those Sean Connery films’.

Reflecting now on his time as 007, Dalton said he has to be careful what he says ‘because, of course, everyone is interested in Bond’. He said the only people who could explain accurately what it is like to be the actor playing 007 are the other actors who have played the part: ‘It’s kind of astonishing, really’.

Did you know? Just after it was released, Timothy Dalton said he was ‘hugely impressed’ with Skyfall (2012). He also told the Sunday Express in December, 2012: ‘On almost every level this Bond movie is right at the forefront of what cinema is capable of. It is an absolutely modern James Bond, a movie truly of its time. Daniel Craig is fantastic and it feels very real’.