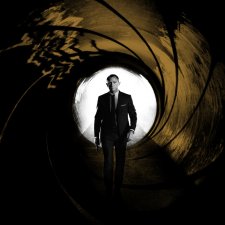 Daniel Craig’s third James Bond movie ‘Skyfall’ has continued its massive success on both sides of the Atlantic, with reports from Britain, Canada and America indicating that the new 007 adventure is breaking new box office records, as well as doing tremendous business in many other key markets around the globe.

After a four-year absence away from the cinema screen, there is now absolutely no doubt 007 has returned in triumph. Reports about the movie’s continued strong performance in Britain over the weekend of November 10-11 said that ‘Skyfall’ has easily become the biggest movie of 2012 at the UK box office, after just two weeks on general release.

In fact, by last weekend, the film had made over £57m, and had even surpassed the Batman movie ‘The Dark Knight Rises’. If accurate, the figure makes ‘Skyfall’ the highest grossing Bond film in the UK in recent times, surpassing the £55.6m made by Craig’s first Bond movie ‘Casino Royale’ in 2006. EON producers Barbara Broccoli and Michael G. Wilson told the British press at the weekend: ‘We are thrilled and proud to reach this box office landmark in record time, and are delighted that UK audiences continue to enjoy Skyfall‘.

Further reports on Wednesday November 14 indicated that ‘Skyfall’ had reached £60m at the UK box office, with the movie chain Cineworld (the UK’s second-largest chain behind Odeon/UCI) reporting that the movie had performed ‘exceptionally well’, providing a major fillip to the British box office after a dip in ticket admissions during the summer period.

Meanwhile, reliable movie industry reports from Canada and America, where ‘Skyfall’ went on general release from Friday November 9, say that the new James Bond adventure broke opening weekend records. Reports from the box office tracker Exhibitor Relations in Los Angeles, for example, said that ‘Skyfall’ had swept the USA, taking $87.8m (£55m) in its first weekend. In the process, the new 007 movie pushed Disney’s family animation ‘Wreck-It Ralph’ to no. 2 at the American box office.

The box office results for ‘Skyfall’ in the USA include its notably strong performance at IMAX screens, which helped the film considerably by earning $13.1m on those screens alone. Moreover, within four days of its release, playing at over 3,000 screens, ‘Skyfall’ had broken the psychologically-important $100m+ mark, which is an astonishing achievement. The north American market has always been particularly important for the Bond franchise and, despite some mixed reviews in American newspapers, ‘Skyfall’ is clearly drawing in a wide range of cinema-goers, helped by strong word-of-mouth feedback and some excellent marketing. Some movie blogs in the USA have even reported that audiences have given the film a round of applause when Bond’s Aston Martin first appears!

All this guarantees that James Bond fans will definitely not have to wait another four years for the next 007 movie. It is also a major boost for the studio MGM, which just two years ago was in serious financial difficulty, but can now claim that it has reached a new stage on the road to restoring its fortunes. The results also suggest that there will be strong pressure to reassemble the same ‘Skyfall’ directoral and production team for Bond film no. 24.