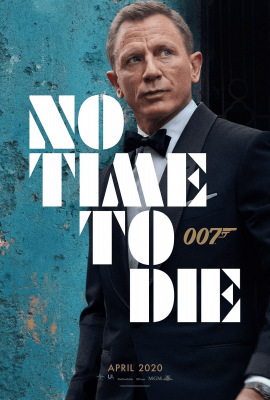 It’s here! To celebrate Global James Bond Day, the first official teaser poster for No Time To Die has been released, with Daniel Craig looking rugged and full of purpose, as he wears a tuxedo and glances ahead.

There has already been much praise on social media and in Bond forums for the new poster, which quickly went viral on the global internet.

The 25th Bond production recently completed some key filming in Matera in southern Italy, and a special wrap party was held for Daniel and the crew, arranged by Bond producer Barbara Broccoli (who was present).

At one stage in the party, Daniel made a brief but heartfelt ‘thank you’ speech to the guests and assembled film crew, thanking them for all their hard work. He also told the attendees: ‘You have done the most amazing job. I could not be more proud to work with every single one of you’.  He then cut a special three-tier James Bond cake.

(Warning: Possible Spoilers Ahead): The filming in the beautiful and sunny town of Matera, which included a major car chase at its heart involving Bond’s iconic Aston Martin DB5, had been going on for a number of weeks over late August and September. It saw both Second Unit stunt work and some First Unit work with Daniel, Lea Seydoux and other cast members.

The latter stage of the filming was overseen by director Cary Fukunaga, and included a balcony scene, an explosion, a romantic sequence with Bond and Dr. Swann, a jump over a railway track, and – interestingly – a sequence in a cemetery on the outskirts of the town (a set which was specially constructed for the movie).

As many Bond fans know, the 25th entry in the smash-hit EON franchise will be released in April, 2020. Watch this space for more news as it happens. You know the name, and you know the number. 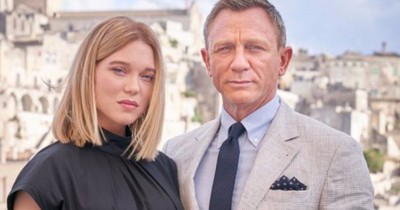