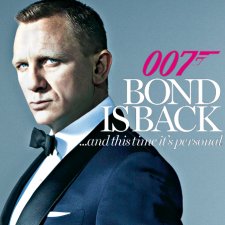 The British Sunday newspaper ‘The Mail on Sunday’ made it’s weekly ‘Live’ magazine a ‘Skyfall’ special collectors edition on September 30.

The souvenir magazine, with a striking image of a mean and moody Daniel Craig in bow tie on the front cover, was designed to help celebrate both the new Bond movie and 50 years of the 007 series.

The special issue of ‘Live’ included articles on the ‘Skyfall’ pre-credit sequences shot in Turkey (and illustrated with some lavish stills), a set of interviews with Sam Mendes and the main stars, a profile of 007’s leading villains over the years, a look at the shooting of the London Underground train sequences in London and Pinewood (including a glimpse at a storyboard), a profile of two of the leading stuntmen on the movie, a short interview with the new ‘Q’ (Ben Whishaw), an exploration of how the Skyfall Lodge explosion was carried out in Surrey, a profile of the main Bond women in ‘Skyfall’, and (finally!) a special essay by the thriller writer Lee Child, who offered his interpretation of why Ian Fleming’s adventures appealed so strongly to post-war British audiences.

There were some nice surprises in the magazine, but also some minor plot spoilers, including some information about 007’s imaginative use of a Caterpillar Excavator, a glimpse of what happens to the villain’s helicopter during the Skyfall Lodge sequences (shot at Hankley Common, in Surrey, which doubled for Scotland), and some detailed information about how certain stunts were achieved for the movie.

There were also some further clues offered about the role of Bond in relation to the plot of the main section of the movie. According to Sam Mendes: ‘While Bond’s been away the world has changed. And when he comes back MI6 is in a different place and is staffed by different people. None of the things that he expected to find are there’.

All in all, the special issue was an excellent souvenir to add to the growing pile of ‘Skyfall’ tie-in magazines that have already appeared this year. Welcome back, Mr. Bond.