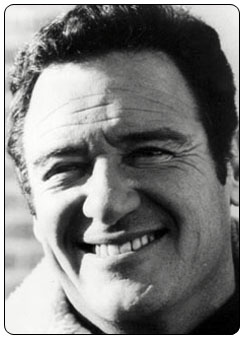 In the first EON James Bond film, it was not Sean Connery who appeared in the famous gunbarrel that opened the movie: that honour fell to stuntman Bob Simmons, who could also claim to be the very first Bond stunt artist. In 1987 a short but very entertaining book appeared, Nobody Does It Better, which was the autobiography of Simmons, whose extraordinary career as a stuntman spanned some 25 years.

In fact, Simmons was both a highly respected stuntman and stunt coordinator/director on many of the classic scenes of the James Bond films, and worked with no less than two 007 actors: Sean Connery and Roger Moore.

The JBIFC takes the opportunity to look back on the career of Simmons (1922-1987), and offers (00)7 bullet-points, some well-known but others less so, on his long and spectacular association with the James Bond movies.

001: Simmons recalled that James Bond came into his life with a phone call out of the blue from Albert ‘Cubby’ Broccoli, who he had first worked with on some Alan Ladd films. Cubby said: ‘We’ve chosen our man. Can you get out to Jamaica and set up the action?’ Simmons was pleased when he heard Sean Connery had been chosen, and was also keen to work with director Terence Young again, with whom he had worked on The Red Beret, Action of the Tiger and a film called…. No Time To Die.

002: The first time he threw a punch at James Bond (Sean Connery), Simmons was ‘all togged up’ in the chauffeur’s uniform of ‘Mr. Jones’ (played by Reggie Carter) for an early fight sequence in Dr. No. The fight, rehearsed carefully beforehand, saw Simmons being flung head over heels by 007 into some bushes at the side of the dusty road (the henchman, as we all know, after asking Bond for a cigarette, committed suicide). As Simmons made it clear, translating descriptive passages from novels ‘into fluid movement that looks real is not as easy as it may seem. You have to choreograph a fight like a ballet…’.

003: It was also on Dr. No that Simmons was called upon to do a stunt that, he said, he vowed he would never, ever do again: go to bed with a spider! Doubling for Connery, Simmons agreed to have a real tarantula spider crawl across his body and shoulder: ‘I tried to close my mind to what was going on. I lay there, petrified…’. But what made it worse was that the director, Terence Young, insisted that one more shot was taken, so Simmons had to do it all over again. Needless to say, Simmons was not very pleased, especially as he realised he had not negotiated any extra fee for the dangerous work.

004: Simmons regarded the duel between James Bond and ‘Red’ Grant (Robert Shaw) on the Orient Express in From Russia With Love as ‘one of the most realistic examples of hand-to-hand combat ever filmed’. Working as Connery’s double on the now famous  From Russia fight sequence, with Jack Cooper doubling for Robert Shaw, Simmons said ‘it was a peach of a fight’, helped by editor Peter Hunt’s suggestion that a third free camera be used.

005: The final confrontational fight between 007 and Oddjob (Harold Sakata) deep inside Fort Knox in Goldfinger was, as Simmons put it, ‘a lengthy spectacular battle in gladiatorial style’. Simmons choreographed the entire sequence, ‘one of the most memorable I have ever staged and I shall always be proud of it’. As Simmons recalled: ‘Shocked to death, no actor could have wanted a finer exit than Harold Sakata as Oddjob. For added impact Harold agreed to crash face down on the floor without any attempt at a break-fall. It was a tremendous shot’. 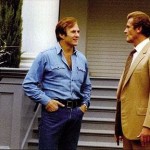 006: For Roger Moore’s debut as 007, Simmons, working as stunt co-ordinator on Live and Let Die, recruited a protege of his, Irish stuntman Martin Grace, to act as Roger’s stunt-double. There was a certain amount of resistance to this, so Simmons arranged a fight sequence – a test piece between himself as an adversary and Grace as Bond. At the end of showing the test-screening, when the lights went up, Roger’s wife said: ‘Roger, that was very good. You are moving well’. Problem solved: Martin was then fully accepted as Moore’s stunt-double, and remained so on many of Roger’s subsequent Bond pics!

007: Bob Simmons was surprisingly modest about his own work on the Bond films and in the film industry more generally. However, when the Motion Picture Hall of Fame in Hollywood announced that its members had voted him Best Stunt Co-ordinator for Roger Moore’s fifth 007 movie For Your Eyes Only in 1980-81, it was evident that Simmons was very pleased: he said he was very conscious of the honour ‘because the Hall of Fame is dedicated to the men and women who make motion pictures a true art form and I regarded my award as an accolade for all that I had learned and achieved in a career devoted to stunt work’. Indeed, many stunt artists ever since have taken Bob’s professionalism as a perfect role-model for their very important trade.

The JBIFC had the opportunity to chat at length with Bob, while he was taking a break between sequences on the set of Octopussy at Wansford, Peterborough, back in September, 1982. We also presented him with a copy of a John Gardner James Bond novel. He was very generous with his time, and keen to talk about the major role that stunt artists have played in the production of the 007 franchise. An account of this was published in an issue of the James Bond Collectors Club News no.5 (June, 1988). 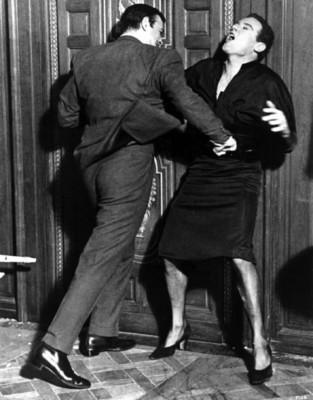 Simmons as the ‘widow’ in Thunderball’s pre-credits fight.