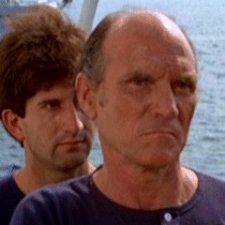 The veteran stuntman performed key stunts in eleven EON Bond movies and made various appearances on screen himself, usually as a menacing henchman (as in ‘Thunderball’ and ‘For Your Eyes Only’), or as a member of the support staff of Q-Branch (as in ‘Goldfinger’). He was involved with the Bond series from the beginning, at one point doubling for Joseph Wiseman in ‘Dr. No’. When regular stunt co-ordinator and double Bob Simmons was unavailable for ‘On Her Majesty’s Secret Service’ (1969), Leech was promoted into the role for the movie.

He was very generous with his time to Bond fans and strongly held the view that  the key to the success of the Bond movies is (as he put it) ‘superb action, good characters, good writing’. George also emphasised that the action should be realistic and ‘genuine’. Indeed, for many Bond fans, some of his best work came when he acted as the stunt co-ordinator for OHMSS, where he also doubled for George Lazenby. He was determined to ensure the new James Bond actor would make the most of his ‘physicality’ on screen, and he saw numerous possibilities in the script for this to come across with some daring and tense sequences. In fact, Leech was so keen to root the scenes in realism that, at one point (and unusually), he even sustained an injury, dislocating his arm after slipping off one of the cables during the complex cable-car sequences. But his attention to careful planning and executing realistic stunts led to some of the most thrilling fight scenes in the series.

George started his film career in 1947 when he stood in for James Mason on the movie ‘Odd Man Out’. His other film work during his long and distinguished career included ‘The Guns of Navarone’, ‘Chitty Chitty Bang Bang’ (produced by Cubby Broccoli), ‘Kelly’s Heroes’, ‘The Eagle Has Landed’, ‘A Bridge Too Far’, ‘Revenge of the Pink Panther’, ‘Superman’, and ‘North Sea Hijack’ (which starred Roger Moore), and ‘Never Say Never Again’ (the non-EON Bond movie).

George had two daughters, and one of them, Wendy, became one of the first major stunt-women in the UK stunt industry. She is married to another Bond stunt veteran, Vic Armstrong.