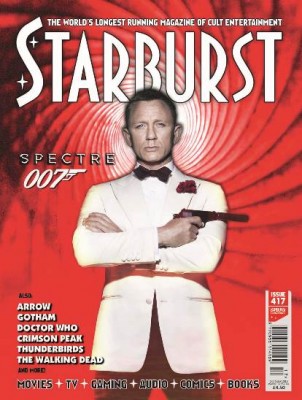 Now, pay attention, 007: the flow of SPECTRE-related magazines continues to build and could soon take over the globe! The popular British sci-fi and cult entertainment magazine Starburst for October 2015, for example, devotes a section of its latest issue to a preview of the upcoming new Bond movie.

With an attractive and glossy cover design (showing Craig as 007 in a white tuxedo), the new issue of Starburst has a main article on the new Bond adventure, which is entitled ‘We’ve been expecting you Mr. Bond…’, and is written by John Townsend. This is followed by another article, written by Jack Bottomley, entitled ‘Buy Another Day’, which looks back through the decades at the ‘weird and wonderful’ merchandise that was inspired by James Bond. There is also a two-page article on the various James Bond video games that have appeared over the years.

An editorial by Jordan Royce in the magazine proclaims that the biggest bad guys in the Bond universe, SP.E.C.T.R.E., ‘are back’, and notes that: ‘The pop culture impact of Ernst Stavro Blofeld and his hi-tech goon squad has expanded much in the years since they have been away…’.

The main article by Townsend, although only three pages long, offers Starburst readers some background to the evolution of Craig’s tenure as 007 and also some analysis of the fortunes of SP.E.C.T.R.E. in the Bond movies since the 1960s. It wonders whether Blofeld will actually appear in the new film, and speculates that the Bond producers may be holding over the figure of Blofeld himself for an appearance in the next entry in the series.

With an equally attractive painting-design as an alternative cover, the new issue of Starburst (no. 417, October, 2015) is on sale in the UK now, priced £4.50. It will prove a very nice addition to the shelves of Bond magazine collectors.

Starburst magazine first appeared on the scene in the 1970s, and became something of a ‘must-have’ purchase for dedicated Bond fans, who, back then in the pre-internet days, were often starved of reliable Bond film news. The magazine carried some excellent coverage of the 007 movies.

It also had, for a while, a regular column by the James Bond and general cult movie expert John Brosnan, author of James Bond in the Cinema (1972), a book which was arguably one of the first nostalgic and appreciative surveys of the James Bond movie franchise. Brosnan also used his column in Starburst to sometimes give his views on the latest Bond movie as it came out. While he was not himself a great fan of the direction which the films were taking during the Roger Moore years, he still retained a tremendous affection for the franchise. In many ways, he helped enthuse a whole new generation of Bond movie fans.

SPECTRE, the latest entry in the iconic series, will be premiered in London on October 26th. Are you ready??

Band, James Band. According to the new issue of Starburst, in 1965 there was even a set of James Bond rubber bands available to buy. Made by Tin Tin Bazar Inc., the boxes they were sold in were decorated with images of Sean Connery as 007 in his tuxedo. They must have still been in production in 1967, as one of the boxes carried an image of the film poster artwork from You Only Live Twice. 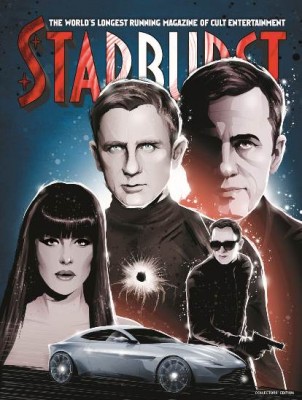