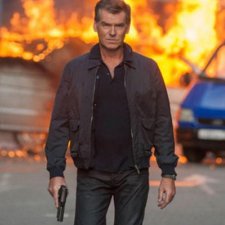 With the general release of Pierce Brosnan’s new spy thriller The November Man in American theatres on August 27, the former 007 star has been talking about the movie and his debt to James Bond, and has also confirmed plans for a sequel.

Although the new film has received mixed reviews from American critics, Pierce has remained very upbeat about the movie and the central character, and was clearly pleased to be able to play an action role again.

The World Premiere of the new movie, which is directed by Roger Donaldson, took place on the evening of Wednesday, August 13, at the famous Chinese Theatre in Hollywood, Los Angeles. Brosnan plays veteran former CIA agent Peter Devereaux (code-name ‘November’) in the film, which is based on a series of best-selling novels by Bill Granger. Indeed, the seventh book in the series, There Are No Spies (1992), has been reprinted as a tie-in novel for the new movie and released under the title The November Man.

Brosnan and his lovely co-star Olga Kurylenko (who played Camille Montes in Quantum of Solace) both attended the LA premiere, and both stars generously spent time signing autographs for fans, who had been waiting patiently across the street since the afternoon on a notably hot day. Other special guests at the red-carpeted November Man premiere included actor Ben Kingsley (Ghandi) and two-times James Bond director Martin Campbell, the man who launched both Brosnan and Daniel Craig on their Bond careers, directing the debut 007 movies of both actors to much acclaim.

Looking super-cool in a dark three-piece suit, 61-year old Brosnan, when asked by the media to comment about director Roger Donaldson’s view that Brosnan’s character Devereaux ‘could kick James Bond’s butt’, smiled and described his character as a ‘hard-boiled man, a cultured bad-ass and sassy operative’, a man who had been in the game of espionage for quite a long time and is called out of retirement for a special job.

Brosnan said he felt there had been sufficient time between him playing Bond and the present day for him to ‘jump back into the ring’ and play a spy again. He also said that he had very good support on the movie from a team who had worked with him previously on the Bond movies, led by stunt co-ordinator Mark Mottram. Mottram was Brosnan’s (uncredited) stunt double on his second 007 movie Tomorrow Never Dies (1997) and The World Is Not Enough (1999), and was also a stunt performer on Brosnan’s final Bond movie Die Another Day (2002). Pierce joked: ‘He and I saved the world a few times!’

Pierce also revealed that they were allowed to have free run of the streets of Belgrade, in Serbia, for the new movie, which allowed them to create plenty of dramatic explosions and gritty action for the fast-paced plot of the movie. Apparently many locals, who are so used to seeing guns on the streets of the Balkans city, did not bat an eyelid as the movie crew took full advantage of the former war-torn area.

While busily promoting The November Man since its premiere, Brosnan has made some interesting further reflections on the links of the movie with his time as James Bond and, in the process, has given us some intriguing clues as to where he may have possibly taken Ian Fleming’s creation had he been given the chance of a final James Bond movie.

Speaking to Wenn, for example (August 21), Pierce revealed that he signed up for the role of Peter Devereaux in a bid to conclude his journey as James Bond which, in a sense, was ‘unfinished’ after he was abruptly replaced as 007 by Daniel Craig. Brosnan told Wenn that he never really got the chance to get the Bond franchise or character out of his system. But now November Man has helped him ‘exorcise’ that ghost once and for all.

Brosnan said: ‘After my four outings as James Bond there seemed to be unfinished business in the way that the Bond films finished in my life and the demise of Bond going offstage left into the night; it seemed like there was a certain void there… Bond was so big and mighty in my career’. He added: ‘I wouldn’t be in the company of you all, talking about The November Man, if it hadn’t been for James Bond’. On the other hand, given the complexity of the character of Devereaux, which (he said) had a ‘punch and a grit to it’, Brosnan said the role had given him ‘the opportunity to really take the gloves off’ and ‘be as hard as nails’, showing a moral ambivalence to the character.

Olga Kurylenko, asked by Wenn to comment about her role in the new film, said: ‘It feels like I’ve done two Bond films! It was wonderful working with Pierce; it was a gift. It was great with tons of action and we both already have certain skills so we were prepared with all our past and all the Bond movies’. Hearing this, her co-star Brosnan added: ‘There was a similarity in the role because Olga had been with Daniel in the Bond movie. But it was Olga’s work and her talent and beauty and vulnerability that just made sense’.

Produced by Brosnan’s own LA-based Irish Dreamtime Production company, which he formed in 1996 and runs with business partner Beau St. Clair, the new movie may get a sequel. When he appeared on The Tonight Show on August 20, Pierce officially announced that a sequel is being developed. Brosnan’s film career goes from strength to strength: he has completed roles in four movies currently in the pipeline, and all the films are now in post-production.

Note: A shorter version of the above report appeared in the JBIFC’s recent Summer Newsletter, which is still available on the JBIFC’s Facebook site.