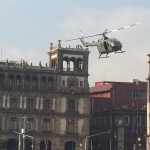 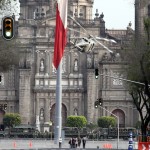 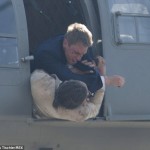 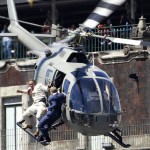 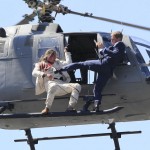 Doubly spectacular, 007! With the principal location filming by the main unit in Mexico now complete, there is growing anticipation that the pre-credits sequence for SPECTRE is set to be the biggest opening sequence ever filmed in the EON James Bond franchise.

This is the result of comments from both the EON producers and the main star, Daniel Craig, who is playing James Bond for his fourth time and is now taking a break from filming after some minor surgery.

EON co-producer Michael G. Wilson, for example, told the UK’s popular Empire movie magazine recently that ‘it is maybe the biggest sequence we’ve done’. Similarly, Daniel Craig – speaking to the UK’s Mirror newspaper when he was still filming in Mexico – commented: ‘It’s one of the biggest opening sequences I think the Bond franchise has ever done’.

After considerable pre-shooting preparations, the main unit’s filming on the pre-credits sequence in Mexico City took just under three weeks. As the JBIFC previously reported (see our news items for March 22 and 26), after the special press call held on March 18 in Mexico City, the main filming activities quickly commenced under the watchful eye of Sam Mendes, with footage shot on a complex chase sequence, set against the backdrop of the annual and very colourful Mexican Dia del los Muertos (‘Day of the Dead’) festivities.

This included some helicopter footage shot over the famous Zocalo square in the city (using a large Messerschmitt Bolkow Blohm B0105 helicopter), various shots of the ‘Day of the Dead’ crowds (involving an estimated 1,500 locally-recruited extras), some high balcony stunt sequences with Craig, some interior and exterior sequences at a hotel, some scenes with Mexican actress Stephanie Sigman (who plays Estrella, who at one point is seen wearing colourful ‘Day of the Dead’ face makeup), and gritty post-explosion chase scenes between Craig and Alessandro Cremona (who plays white-suited Marco Sciarra).

While in hot pursuit of Sciarra, Bond chases him through crowded streets populated by ‘Day of the Dead’ revellers dressed as skeletons and zombies. Huge Catrina figures, known locally as ‘Dapper Skeletons’ and ‘Elegant Skulls’, added extra visual impact to the exciting foot chase through the parade.

And Bond could certainly be seen as a ‘kite dancing on a hurricane’ (so to speak) during the climax to the chase. Filming during the final week of principal photography in Mexico City included what can only be described as some truly spectacular stunt work, involving the helicopter used earlier in the Mexican shooting and a pair of stunt doubles standing in for Craig and Cremona.

According to accounts by locals and also a detailed report by John Hiscock for the UK’s Mirror newspaper (April 1), after 007 is seen chasing assassin Sciarra through the hundreds of revellers who are celebrating the annual parade, Sciarra leaps into a waiting helicopter and appears (at first) to have escaped Bond’s clutches. However, James Bond manages to jump onto the helicopter as it takes off, and the two men then engage in a breathtaking and highly-physical mid-air fight on the outside of the B0105 helicopter.

Interestingly, instead of using CGI to replace the Bond stuntman’s face (as happened on Skyfall), the stunt team appeared to return back to basics, using some more traditional filming techniques: Daniel Craig’s stuntman wore a prosthetic mask for the helicopter action sequences. At one point, when Craig and his stuntman double stood among the film crew watching some of the preparations, it was quite difficult (from a distance) to tell them apart.

The helicopter fight sequences, which were shot mainly over the course of March 28 and March 30, saw the B0105 rise high above Zocalo square, carrying out some impressive vertical climbs and falls and also some nerve-wracking acrobatic manoeuvres very close to the buildings around the square, at one point nearly scraping a high flag-pole.

According to reports, the B0105 was apparently piloted by the veteran Texan stunt pilot Charles ‘Chuck’ Aaron, who is the only helicopter pilot licensed in the USA to perform 360 degree rolls in mid-air, and is one of only three such pilots in the world. His previous stunt work on the big screen has included movies such as The Rock (1996). The German-built Bo105 helicopter is a light, twin-engined multi-purpose machine, known for its high levels of aerial agility.

This was certainly evident during the stunt sequences. At one stage, onlookers could see the two stunt doubles fighting one another while perched precariously on the landing skids of the helicopter, as it clipped the corners of some specially prepared buildings. The dramatic struggle will undoubtedly prove to be one of the highlights of the pre-credits to the movie. As the UK’s Daily Express newspaper (March 31) reported, the film-makers managed to obtain – as the paper so vividly put it – some ‘incredible images’ for the ‘death-defying’ aerial sequence. Gracias, Mexico!

According to some other reports, after the SPECTRE main unit left Mexico City to return back to London, a second unit stayed behind for a few more days in the Palenque area, in the state of Chiapas, to complete some more work on the helicopter sequences. This was done for safety reasons, but also to get some further spectacular background shots. The additional work appeared to be in the can by April 6.

The complex Mexican leg of production on SPECTRE is reported to have gone really well, and the EON producers have expressed strong appreciation of the help they received. Speaking to the press in Mexico, Bond producer Barbara Broccoli said: ‘We’ve had tremendous co-operation’. She said they knew they had caused the local citizens ‘a lot of inconvenience but the people in the city seem to have understood and embraced all the disruption and been very good-natured about it’.

Meanwhile, there has been a flurry of media reports in response to the news on April 5 that Daniel Craig had flown from Mexico to New York to have some surgery to repair a knee injury sustained while fliming scenes for the new 007 movie.

EON Productions confirmed that Daniel had had a ‘minor procedure’ during a break in production over the Easter period. A spokeswoman for EON denied media reports that the Bond star had missed several days of filming, and explained that: ‘During a sceduled break, Daniel Craig had arthroscopic surgery to repair his knee injury. He will rejoin production on April 22 at Pinewood’.

One (unconfirmed) UK report claimed that the 47-year old actor gained the injury in the Alps in Austria, and it was exacerbated while filming a fight scene some days later at Pinewood studios in the UK. While on location in Mexico, although the 007 star threw himself into the stunt work with his usual characteristic relish, it was then decided that Daniel’s knee would have to receive some specialist treatment.

In the meantime, production work on interior scenes involving other actors has continued at Pinewood studios.