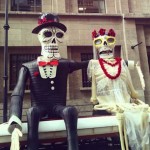 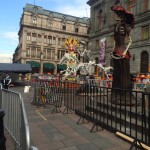 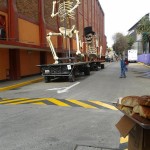 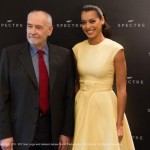 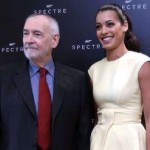 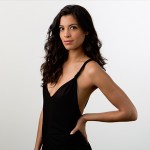 Various Mexican journalists and media representatives, together with some other distinguished members of the world’s press, attended a SPECTRE press call yesterday (18th March), held at the Four Seasons Hotel in Mexico City.

The special press and photocall was held shortly after members of the First Unit and main cast of SPECTRE arrived in Mexico this week to commence filming on sequences for the pre-credits to the movie. According to EON, a key backdrop feature of the pre-credits will be the famous Mexican ‘Day of the Dead’ festival, and filming on this will start this coming weekend.

Sigman, who apparently met Daniel Craig for the first time two weeks ago, will also start shooting her scenes this weekend. She told the assembled journalists: ‘I feel anxious and excited’, but she added that it ‘will be an amazing experience’. Wearing a bright creme-yellow dress, at one point Sigman posed alongside Wilson for the traditional press call photos.

According to the local city authorities, a number of streets in the historic centre of Mexico City will be closed to vehicles from Thursday, 20th March to Wednesday, 1st April. The location filming will include sequences at the Plaza Tolsa, 21st-24th March, and the Plaza de la Constitucion, 25th-31st March.

It is also expected that there will be some interior and exterior filming at the beautiful El Gran Hotel de la Ciudad de Mexico. The latter has already been a part of ‘Bondian’ history, as the hotel was also used in Licence to Kill (1989). The last few days have also seen busy preparations being made in Tolsa square for the ‘Day of the Dead’ festival scenes, with an array of large skeleton props and special floats being given some last-minute set-dressing.

Michael G. Wilson used the press conference to shoot down some of the more outlandish rumours that have recently appeared in the Mexican media and elsewhere about the SPECTRE filming in Mexico. He was especially keen to refute rumours that some kind of underhand dealing had taken place between EON and the Mexican government and other key investors.

The Bond producer explained that EON had originally been put in touch with Mexican investors who were keen to promote more tourism to the country. He said: ‘In this particular case, there was a company that joined us on this adventure – supporting tourism in this country. There was a group of hotels, and there are others involved. We got financial support’.

Wilson emphasised that it was EON’s policy not to disclose the amount that had been invested, but he added that it was not public money from the Mexican government. He said Bond movies are not ‘political’ but are, rather, ‘entertainment’. The veteran 007 producer added that the Mexican government have been very helpful in safeguarding locations for EON in the country, and have helped to smoothe the way locally where filming arrangements could possibly disrupt local routine.

Wilson especially emphasised to the assembled journalists that at no point did the Mexican government have any creative influence over the movie and its script, and he firmly dimissed rumours that Stephanie Sigman had been cast to appease the Mexican authorities; he said EON had long been looking to cast a Mexican actress, as ‘the role required it’.

Recent press reports, such as the LA Times (March 13th) and the UK’s Daily Telegraph (March 14th), have claimed that the Mexican goverment, while offering millions of dollars in tax incentives to SONY and MGM for SPECTRE to shoot in the country, was also sensitive about how Mexico would be portrayed, and requested changes to the script in return for its largesse. The newspapers have based their claims on earlier leaks from SONY.

It is clear that Wilson wanted to use the press call in Mexico City to demolish these stories. Meanwhile, the plan to have the famous and colourful Mexican ‘Day of the Dead’ festivities play a big role in the pre-credits ties in nicely with similar events used previously in the 007 franchise: in Thunderball (1965), for example, the traditional Junkanoo carnival event in the Bahamas was used as backdrop for a chase sequence on foot, and in Moonraker (1979) the film-makers made use of the famous and spectacular Rio carnival.

Welcome to Mexico, Mr. Bond. They’ve been expecting you.