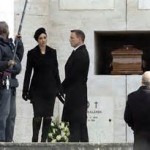 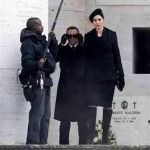 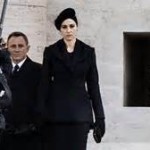 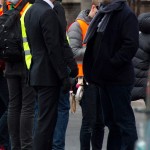 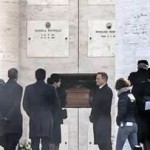 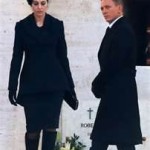 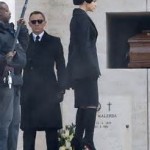 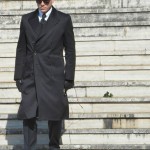 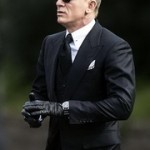 The Italian leg of shooting on the new 007 adventure SPECTRE has now swung into full action, with scenes already shot at a famous Museum location and some early work started on the complex car-chase sequence in Rome.

After their special photocall with the media at the Rome City Hall on the afternoon of Wednesday 18 February, Daniel Craig and Monica Bellucci started filming early the next day (19 February) at the Museo della Civilta Romana (Museum of Roman Civilization), which was doubling as a neo-classical style cemetery and mausoleum, complete with fake headstones, crypt and memorial name-plaques added by the set-designers.

Craig and Bellucci spent a good part of the day at the impressive-looking location, which has distinctive white marble colonnades and a wide esplanade and driveway, with both actors dressed in smart and formal dark mourners attire, evidently attending an internment.

Craig, wearing a knee-length black coat and sunglasses, at one point was filmed discreetly watching the funeral proceedings, briefly mingling with a small number of mourners and glancing at some of the memorial plaques; at another point he was filmed in conversation with Bellucci, who plays the part of Lucia Sciarri in the movie, and watched her as she left via some wide stone steps, to be picked up by a waiting vehicle.

On Saturday, 21 February, preliminary work also commenced in central Rome on what promises to be an action-packed car chase through the streets and along the embankment of the River Tiber. Craig was seen at the wheel of the new Aston Martin DB10 for the first time, and various test shots were taken of the notably sleek car in action, overseen by director Sam Mendes and stunt co-ordinator Gary Powell.

Tourists were more than surprised to see the new Aston Martin being driven along the Via di San Gregorio, near Rome’s iconic Colosseum. Other parts of the planned route were also tested out. Onlookers also spotted the Jaguar C-X75 hypercar at the location, which will apparently be driven in the movie by the tough henchman Mr. Hinx (played by Dave Bautista), who arrived in Rome over the weekend.

According to a report in The Times (23 February), however, one problem that the filmmakers encountered on Saturday was the poor state of some of the city’s streets, especially some of the cobblestones and the notable number of potholes. Even though the production company have paid some money towards the repair of some of the roads, the UK newspaper claimed that this work had still been insufficient and so the Aston Martin never reached more than 40 mph during Saturday’s filming.

Meanwhile, recent days have also seen members of the stunt unit planning and rehearsing some of the complex car-chase manoeuvres that will be filmed along some of the narrow roads and embankment pathways that run alongside the Tiber, including near the famous and beautiful Ponte Sisto bridge, which will be the scene of a key stunt in the storyline. Locals also noticed there have been more efforts to clean up some of the embankment walls, especially near the Ponte Sisto, with a cleanup crew removing unsightly weeds and some ugly grafitti, in line with recent promises made by the City Hall authorities.