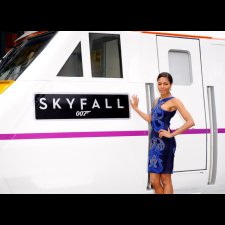 To mark the release of Skyfall on Blu-ray and DVD in the UK, it has been announced that the 007 movie is now the first film to have a train specially named after it.

Moreover, to help celebrate the smash-hit success of Skyfall at the UK box-office and its new release on DVD, a special Bond-themed ceremony was held at London’s King’s Cross Station on the morning of Saturday, February 16, where some members of the team involved in the making of Skyfall, including Miss Moneypenny (Naomie Harris), gathered to witness the unveiling of a new Skyfall locomotive and its eleven carriages.

The East Coast train, which runs from London to Edinburgh and is numbered 91007, has been permanently named Skyfall by the UK’s East Coast Main Line Company (otherwise known as ‘East Coast Trains’). The Company owns 44 trains, and the London to Edinburgh route is their principal operating line, running through cities such as Peterborough, Leeds, York and Newcastle, before entering some of the highly scenic and beautiful countryside of Scotland.

In a partnership deal negotiated between Twentieth Century Fox Home Entertainment, MGM Studios and East Coast Trains, all of the locomotive’s eleven carriages unveiled at the launch on Saturday were wrapped in some eye-catching artwork from the movie.

Launch day saw Naomie (who was wearing a bright blue dress and was the centre of media attention), together with EON Producers Michael G. Wilson and Barbara Broccoli, plus screenwriters Neal Purvis and Robert Wade, along with journalists and other guests, watch the unveiling of the new train on Platform ‘007’ (where else?!) at the famous station in central London. At one point, Naomie commented to the press: ‘I much prefer trains to flying’. After witnessing the unveiling and posing for photos for the media, the 007 team then joined the 8.33am train on its maiden journey to Scotland, taking a route which mirrors James Bond and M’s journey to Scotland in the final stages of Skyfall.

During the course of the four-hour journey, whose progress was regularly updated by Tweets from people on board, the Skyfall team were interviewed by members of the British and international media in some specially-branded First Class carriages, and Skyfall Martini cocktails were also served, based on the special mix created by Savoy Hotel mixologist Erik Lorincz, a mix which was specially designed for the movie. There was also a special Skyfall food menu available for guests. One carriage was also designed as a dedicated Blu-ray screening lounge, where members of the media were able to watch the movie, and explore the special bonus features.

At one point in the journey, there was also a special champagne reception when the train crossed the Royal Border Bridge in Berwick-upon-Tweed, a bridge which, in appearance, some people have compared to the Royal Varda Bridge, the famous and historic bridge used for Skyfall location shooting in Turkey, and which featured in the movie’s action-packed opening credits.

Speaking to the JBIFC last week, an East Coast Trains Company spokesman said members of the public can ride on the new Skyfall train from Sunday, February 17, and also told us that the Company expected ‘a lot of interest in the newly branded Bond train’.

It is especially appropriate to have a train named after a 007 movie. After all, train journeys have featured heavily in both the Ian Fleming novels and in the 50-year old Bond film franchise. Daniel Craig, when interviewed last year during the making of Skyfall, also named the train fight sequence in From Russia With Love (1963) as one of his favourite sequences in the Bond movies.