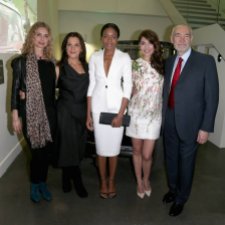 A select range of special guests gathered in central London on March 19 to help launch the new London Film Museum location for the Bond In Motion exhibition, which opens to the general public on March 21.

Bond producer Michael G. Wilson told the media: ‘We think it’s terrific that the London Film Museum have devoted their entire space to our vehicle collection. There are some real favourites here: the Aston Martin DB5, Goldfinger’s Rolls-Royce and Cub 1, Cubby’s personal car’.

The updated Bond In Motion exhibition, which was previously located at the Beaulieu Motor Museum in Hampshire, UK, has added some extra items specially for its new London location, including a one-third scale model of the Agusta Westland helicopter used in the Scottish climax to Skyfall, some Tanker Chase sequence storyboards from Licence to Kill, Vesper’s passport from Casino Royale, 007’s coat-of-arms cufflinks and his evaluation report (both from Skyfall), and the steering wheel of the Disco Volante (villain Largo’s super-fast boat from Thunderball).

The Museum has also just announced that a special display of Aston Martin vehicles will take place in the Covent Garden piazza, in central London, on Sunday, March 23, together with some other Bond vehicles.

At one point at the special launch, Barbara Broccoli responded to a question about the next James Bond movie. She said: ‘We are at the early stages, we start filming at the end of the year and the next film will come out at the end of 2015, so it’s an exciting time for us’.

She explained that they had been working on the script with John Logan, Sam Mendes and Daniel Craig, ‘and it’s evolving’. She added: ‘This is the exciting bit when we get to get all the creative forces together and start developing the action sequences, and the sky’s the limit at the moment’.

The Bond In Motion exhibition at the London Film Museum will be open seven days a week, and will run throughout 2014.