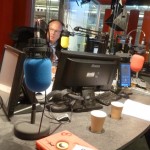 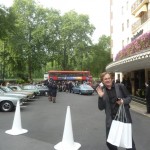 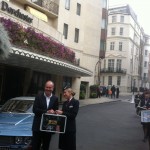 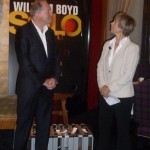 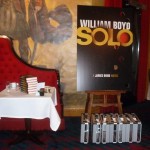 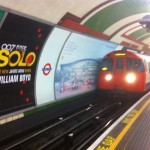 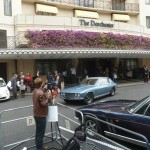 The 25th original adult Bond continuation novel, “Solo”, was launched Wednesday 25th September 2013 at the Dorchester. The event involved an introduction by Ian Fleming’s niece, Lucy, a reading and Q & A by author William Boyd and then a ceremonial signing of 7 copies of the book, placed in 7 transparent briefcases, carried by 7 period costumed BOAC airhostesses to 7 vintage Jensen sports cars which were then driven in a  convoy to Heathrow Airport, destined for seven cities around the world with ties to Boyd or Bond — Edinburgh, Amsterdam, Zurich, New Delhi, Los Angeles, Cape Town and Sydney.

A scrum of distinguished members of the World’s Press attended and the book Bond was back in business. Boyd, who is a 007 scholar, explained how he’s a fan of Fleming first, how he doubted his retro Bond novel set in 1969 would be made into a film, how he sought advice from his friend Daniel Craig before writing the book (Craig starred in the film Boyd wrote and directed, The Trench) and how the actor who comes closest to the literary Bond is Daniel Day Lewis. Witty, urbane, entertaining, Boyd was as suave as vanilla and Bond fans are in good hands.

Solo is the best Bond novel in years. Set in 1969, it is a reality based, thriller centered around the factional conflict in fictional Central African state, Zanzarim and the breakaway Repulic of Dahum. Bond is sent to on a Conrad-esque quest to track down warlord Brigadier Solomon “The Scorpion” Adeka. However, things are not all they seem as Bond and his local translator, Blessing are get caught up in a full-scale civil war over the nation’s newly discovered oil reserves.

The action moves from London to Zanzarim to Washington, and Bond moves around in a Jensen Interceptor FF (the Bentley is being repaired). M, Moneypenny, May and Felix Leiter return but May’s niece, Donalda, Felix’s nephew Brigham also turn up for the ride. Bond has a new secretary, Araminta Beauchamp, a young new Q Branch quartermaster, Quentin Dale and a brand new heavy in the form of Rhodesian mercenary Jakobus Creed.

African expert Boyd writes a superb spy thriller with shades of late period Le Carre. Densely plotted, Boyd writes sparingly but well, capturing location and character and period and most importantly, the spirit and essence of Ian Fleming’s James Bond. Fleming fans will enjoy Solo and those new to the literary Bond world can have no better introduction.   Solo is superb 007 entertainment for the Skyfall generation.