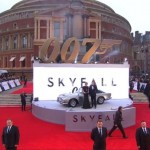 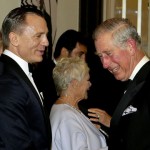 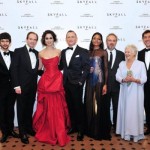 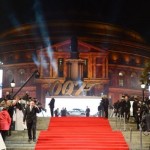 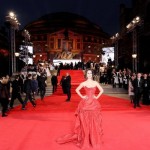 The Royal Premiere of ‘Skyfall’, which took place at the famous Royal Albert Hall in London on the evening of Tuesday October 23, was a huge success, and the first major star to arrive at the venue was 007 himself, Daniel Craig, who was dressed in a distinctive Tom Ford suit and quickly went to meet the lines of excited spectators.

It was clearly London’s most glamorous film premiere in recent memory. It is difficult to describe the fantastic atmosphere that was in evidence all around the Albert Hall. The large back area of the Hall had been transformed into a kind of wide open-air hallway to greet the stars and guests as they arrived, complete with a 100-metre long red carpet, a glittering stage adorned with an Aston Martin DB5, and a giant golden ‘007’ sitting above the stage area. The stars could then walk to the back of the Hall, where they could enter a glass-doored entrance and ascend the red-carpeted stairs into the main foyer and auditorium of the Royal Albert Hall.

Numerous onlookers, dedicated Bond fans, autograph-hunters and photographers had packed the surrounding streets, which had been lined with barricades with large ‘Skyfall’ posters lining all the metal fencing. In fact, eager spectators had begun to arrive as early as 3.00 in the afternoon. The surrounding buildings also saw people looking and hanging out of all the windows to catch a glimpse of the stars, and some of the balcony areas of nearby buildings also became packed with onlookers, who often cheered each star as they arrived or chanted ‘Daniel! Daniel!’ as the 007 star walked slowly along the barricades, chatting to people.

Spectators also climbed onto window ledges or hung precariously off lamposts. A couple of people even climbed on to the roof of one nearby building, but were politely asked to come down by security staff! The theme songs of the James Bond movies were played in the background throughout most of the early evening, while guest presenter David Walliams (himself a big Bond fan) helped interview the various members of the ‘Skyfall’ cast and other special Bond guests live on stage. Numerous television station crews were also stationed along the sides of the open-air hallway area, and a screened-off area was reserved for a large number of press photographers so they could get the best pictures of each star as they arrived.

Craig (who was later accompanied by his wife Rachel) was joined at the event by Naomie Harris, Javier Bardem, Berenice Marlohe, Ben Whishaw, Judi Dench, Ralph Fiennes (with his two sisters), Thomas Newman, the Bond producers Barbara Broccoli and Michael G. Wilson, and the movie’s director Sam Mendes. Each member of the cast made a special effort to spend time signing autographs, greeting excited fans, or having their photos taken by the public or press. Craig, interviewed on the red carpet live for TV, said he had never known a premiere like it, and he seemed taken aback at the incredible enthusiasm of the crowds and the sheer atmosphere of the evening.

Berenice Marlohe, who arrived wearing a striking red Viviene Westwood dress, said that she enjoyed playing a villainous Bond woman in the movie, while Naomie Harris, wearing an eye-catching Mario Schwab outfit, said of the film: ‘I am so excited. I have been waiting ages to see it’. Dame Judi also said she had not seen the movie yet, and was really looking forward to seeing it at last, along with her family. Judi said that she was honoured to be in ‘Skyfall’ and the Bond franchise generally: ‘I hope it lasts another 50 years’. Sam Mendes, shortly after he arrived, commented: ‘It’s a huge honour, and a bit of relief, to be at the premiere of Skyfall. All of us are unbelievably proud of this film’.

Eagle-eyed Bond fans spotted numerous guests from from the world of 007, including (among others) Sir Christopher Lee, Eunice Gayson, Shirley Eaton, Carole Ashby, and stunt coordinator Vic Armstrong. The Prince of Wales and the Duchess of Cornwall were the last special guests to arrive, accompanied by a final playing of the main James Bond theme, and they were personally greeted by the Bond producers Barbara Broccoli and Michael G. Wilson. As Prince Charles entered the ground foyer and climbed the main stairwell he gave a quick wave to the onlookers who were waiting at the side of the Albert Hall, and who had an excellent view of the scene through the glass-fronted sidewall of the main stairs.

The Royal Guests were then taken to a first-floor area where they were introduced to the assembled main cast by the Bond producers, in the traditional line-up that forms part of every Royal Premiere. People fortunate enough to be standing nearby at ground-level to the side of the Albert Hall could gaze up into this windowed area and had an excellent view of His Highness meeting the stars in the assembled line-up.

It was not long after the special guests had gone into the main building, and taken their seats, that workers quickly moved into the public areas and began to dismantle the barricades, and this caused an almighty scramble on the part of members of the public for the large ‘Skyfall’ posters that had been fixed all along the metal fencing. Numerous giant ‘Skyfall’ posters were seen afterwards being carried along the streets from the Albert Hall, hauled along by eager souvenir hunters. It must have been quite a sight to the passengers on the passing London red buses and on the Underground train system!

The main Premiere was followed by a lavish party held at the Tate Modern, on London’s South Bank, by the famous River Thames, where guests walked down a runway which was flanked by video montage screens showing Bond images. They were then again greeted by the sight of an Aston Martin DB5, which this time was surrounded by four beautiful women. The main hall of the Tate Modern had been re-imagined as a Shanghai street scene, complete with a distinctive Chinese dragon.

Sipping a Martini (what else?!) at the post-Premiere party, a very happy Daniel Craig told the press: ‘How could I not enjoy this? The whole night has been incredible. We had an amazing team working on the film and we’ve created something we are all proud of’. Daniel added: ‘We’ve been at the Royal Albert Hall in the presence of royalty and then on to the Tate Modern – this is probably the most memorable night of my career. I just feel honoured, and it shows you what Bond means to everyone’.

According to reports the day after the Premiere, the event raised £300,000 for current and retired members of Britain’s security forces. Advanced ticket sales for the movie in Britain were also reported to be extremely high.