Skyfall in Seven: Looking back on the creation of Craig’s third Bond film

The UK’s main ITV channel has been continuing with its summer season of Daniel Craig Bond films and, as Skyfall is rolled out as part of this, the JBIFC takes the opportunity to look back on Craig’s third 007 adventure as Ian Fleming’s secret agent.

Released in 2012, Skyfall marked the 50th Anniversary of the EON James Bond franchise. It also benefited hugely from being able to appear in the year of the Olympics, which was hosted in London, and during Her Majesty The Queen’s Diamond Jubilee celebrations.

Indeed, the movie’s publicity campaign was able to tie-in very nicely with both events (the ‘Queen’ and Bond, for example, parachuted into the Olympics Opening Ceremony, watched globally by millions!). It was brilliant advance publicity.

For 007 fans, the movie was also very special, as it saw the return of the characters of ‘Q’ (played by Ben Whishaw) and Moneypenny (played by Naomie Harris).

The distinguished actors Ralph Fiennes (as Gareth Mallory) and Albert Finney (as Kincade) also joined beloved thespian Dame Judi Dench in her last but one movie as ‘M’. The critically-acclaimed Spanish actor Javier Bardem (as Raoul Silva) also added an extra layer of gravitas to the strong cast. Together with great cinematography by Roger Deakins and a wonderful main theme song by Adele, all the ingredients came together to create a film that seemed to add real icing to the cake of 50 years of on-screen Bond thrillers.

The JBIFC offers seven bullet-points on the known and perhaps less well-known aspects of production of the smash-hit movie, focusing on the core themes at the heart of the story.

001: With original Fleming titles near-exhausted, the franchise had already faced the challenge of creating memorable and marketable titles in the Dalton and Brosnan eras. The third Craig movie thus went through a series of working titles, including Once Upon a Spy, but adopted a final title created by screenwriters Neal Purvis and Robert Wade which, in hindsight, sounded suitably ‘Fleming-esque’. In fact, the title was very much a last-minute piece of inspiration. The writers had named Bond’s ancestral and childhood home ‘Skyfall’ the very night before they were due to deliver a key draft, and at the last moment (with rain clouds gathering outside and the minutes ticking) they also decided such an evocative title would be a great main title for the movie!

002: General development work on the 23rd EON James Bond film had originally commenced in 2009, although by 2010 it was evident to the producers that complications over the debt difficulties of backing studio MGM would not be resolved quickly and the work was temporarily suspended. 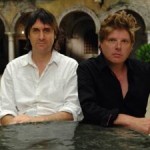 By the end of 2010, however, MGM had reached a deal on its bankruptcy. This partly involved using the James Bond franchise as a way of reviving the financial fortunes of MGM. Neal Purvis and Robert Wade thus set to work again on drafting their 5th consecutive 007 screenplay. They also worked briefly with screenwriter Peter Morgan, whose main contribution concerned the dramatic idea of the death of ‘M’. Award-winning Hollywood screenwriter John Logan conducted a re-write on the treatment, while there was also input from the playwright Jez Butterworth. Both Craig and Sam Mendes had also pitched in ideas, as both of them had re-read the Fleming novels during the temporary suspension of production.

003: As they revealed later, Purvis and Wade went back to two of Ian Fleming’s 007 novels, You Only Live Twice and The Man With The Golden Gun, to draw upon some story elements that had not been used before i.e. the theme of a tired and washed-out James Bond returning to the Secret Service. This core theme also tied in with the vision of new director Sam Mendes, with whom they worked on the treatment for about a year. In an interview for the BAFTA: A Life in Pictures live stage talks, conducted in November, 2015, Mendes explained that, for Skyfall, he had wanted a story about a man who had gone away from England for a while, then returned, and found everything had changed. Bond is then forced to explain and justify what he does. But his old skills and spycraft still prove relevant, even in a new digital era of hi-tech intelligence.

004: Many commentators were surprised over the choice of the award-winning ‘art-house’ theatre and film director Sam Mendes to oversee the new James Bond movie, but Daniel Craig was over the moon. The now familiar story is that, in October, 2009, at a birthday party for Hugh Jackman in New York (Craig had worked on stage with Jackman in an EON-backed Broadway play), Craig had encountered Mendes, who had directed him in Road to Perdition back in 2002. When Mendes had asked Craig what was happening next in his role as 007 and who was going to direct it, Craig had said: ‘I don’t know – why don’t you do it?’ A surprised Mendes thought Craig was joking, but the more he thought about it, the more he liked the idea. He later recalled that he had seen Craig in Casino Royale, had been mightily impressed, and it had woken him up to the possibilities of Bond. He had also been something of a Bond fan himself, having strong memories of first seeing Live and Let Die.

005: Sam Mendes was adamant that a Bond movie could also be ‘a serious movie’. He said in later interviews that he had been determined to craft a serious Bond thriller which borrowed traditional and beloved elements from the franchise but with a new emphasis on ‘character’, nuance and a strong, well-acted plot. 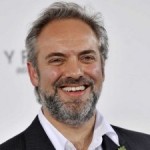 He also wanted to show how Bond was (in a sense) on a ‘journey’ which, in the third act of the movie, took 007 from the present back into the ghosts of his past. In fact, the third part of Skyfall, where Bond would take the battle against the formidable villain Raoul Silva onto terrain he knew more intimately – his ancestral lands in Scotland – led to the idea of a final confrontation with Silva at the gothic and rather gloomy-looking house of Bond’s deceased parents, ‘Skyfall’, which also conjured up Bond’s own traumatic memories of becoming an orphan at a young age. It was also, of course, a great way to prepare cinema audiences for something even more dramatic – the death of ‘M’ in the Bond family’s chapel.

006: While some of this third act was shot in Scotland, the ‘Skyfall’ lodgehouse itself was constructed early in 2012 on Hankley Common, on some Ministry of Defence (MOD) land near the village of Elstead in Surrey. 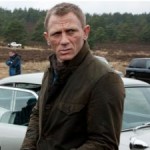 The Common was chosen for its remarkable similarities to Scottish heathland landscapes, and EON set-workers spent over a month carefully designing and building the steel-frame backed sets, both the lodgehouse and Bond family chapel, together with some outbuildings, which were used for principal photography at the location in March, 2012. The deal struck with the local authorities was that EON had to return the heathland area used on the Common ‘back to its original condition’ i.e. as good as they found it. As well as the action sequences, helicopter work and shots of the Aston Martin, Craig, Dench, Finney and Bardem were all used at times at the location. The final ‘big bang’ explosion staged at the location, which took place on the evening of Sunday, 25th March, was heard for many miles around!

007: Both Mendes and Craig, especially given the year it was due for release, were keen to embed very ‘British’ values and iconography at the heart of Skyfall. London locations, which are easily accessible from Pinewood Studios, have also been used at various points in past Bond films. 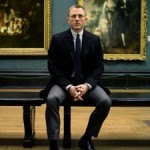 Mendes, whose own company has a production office housed in the famous Covent Garden area in London, pushed the use of London scenes to new heights: the 23rd Bond production utilized a number of iconic London locations for the movie, including the real-life MI6 building at Vauxhall Bridge, the Bridge itself, the Victoria Embankment near the River Thames, a tube station at Charing Cross, the famous National Gallery in Trafalgar Square, and even a car-park entrance near the famous buildings of the Smithfield Meat Market (the entrance doubled-up for the entrance to the newly relocated MI6 HQ). A number of government buildings and roads in the Whitehall and Parliament areas of central London were also used, including the rooftop of a government building where James Bond could look out on the cityscape across the British capital, in contemplative mood after the death of ‘M’.

There was much critical acclaim for Skyfall, which went on general release in the UK in October, 2012. This included high praise from two former James Bond actors, Sir Roger Moore and Timothy Dalton. In November, 2012, Sir Roger, on a tour to promote his book Bond on Bond, said Daniel Craig was ‘a superb Bond’ and Skyfall ‘was an extraordinary piece of motion picture’. Similarly, Dalton, interviewed in December, 2012, made it clear he had been ‘hugely impressed’ with the film, adding: ‘On almost every level this Bond movie is right at the forefront of what cinema is capable of’. 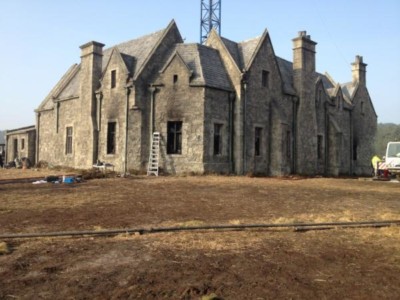