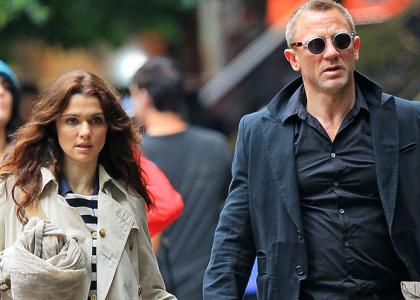 With the Second Unit completing their work in Turkey on Friday May 25, all the main filming on ‘Skyfall’ has come to an end, and the movie now enters the post-production stage.

The Second Unit, which stayed behind in Turkey after the Main Unit completed principal photography in Istanbul, had continued some stunt work in Adana with Daniel Craig. Daniel then left Turkey on the weekend of May 19-20. There was then about a week’s worth of further filming carried out by the Second Unit, which also included (early last week) some location work in the picturesque Duzici district, a pretty location in the Mediterranean area of Turkey. Duzici has some spectacular hills, clifftops and a popular waterfall.

The filming for ‘Skyfall’ involved one of the longest-ever shoots for a Bond movie. As we noted previously, when Bond producer Michael G. Wilson appeared as a guest on the BBC recently, he commented that the filming had ‘been a long haul, but it’s going to be worth it’.

Daniel Craig flew out of Adana using Turkish Airlines, and headed straight for New York (where he has a home) for a well-earned break. He was next spotted on May 24 in New York City, having lunch with his wife Rachel Weisz. Needless to say, some paparazzi were quickly on the scene.

Meanwhile, work is starting on approximately five months of post-production. One key (and eagerly anticipated)aspect of this process will be the movie’s soundtrack and theme song, which is now in the hands of Thomas Newman. Speaking at the recent 2012 BMI Film and TV Awards, when asked about his Bond work, Newham replied that he’s ‘just brainstorming right now’.

From Turkey With Love

Various interesting stories are still emerging about some of the recent ‘Skyfall’ filming in Turkey. A particular favourite of the JBIFC concerns Turkish actor Nusret Ataer. The actor, now 78, had a role as Turkish agent Mehmet in ‘From Russia With Love’ in 1963, and shot some scenes with Sean Connery at Sirkeci Train Station in the capital city Istanbul, which doubled as Belgrade for the relevant scenes in the second 007 movie. Ataer also posed at the time for some publicity shots with Connery and his co-star Daniela Bianchi.

According to Istanbul’s Anatolia News Agency, when Ataer heard that the new Bond movie ‘Skyfall’ was shooting in the city, using some of the same locations as Connery’s second film, he apparently went to the Grand Bazaar and approached members of the main Unit, showing them his 1963 pictures where he posed with Connery.

Sceptical at first, the Unit then took a big interest in Ataer’s story and he was able to pose for a picture with Daniel Craig. Ataer also asked the Unit whether he could appear in a James Bond movie again! Good for him.