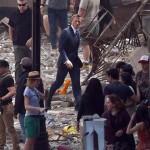 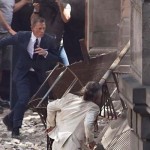 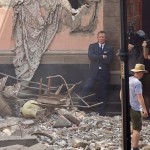 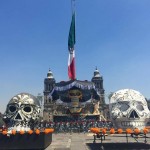 Shooting on the exciting pre-credits sequence for SPECTRE has continued this week in Mexico City, with further ‘Day of the Dead’ festival filming, some interior and exterior scenes at a hotel, and some gruelling physical action involving Daniel Craig pursuing a villain.

After filming took place on Friday 20th March and Saturday 21st March (see the JBIFC’s previous Mexico report), the actors and main production crew were given a bit of a rest on Sunday 22nd in preparation for a new round of main filming this week. In the meantime, some additional set-dressing was carried out at locations in streets near Zocalo Square, including the arrangement of some very authentic-looking fake rubble in Donecels Street and also the careful positioning of some crushed vehicles.

At one point, locals spotted Daniel Craig, wearing a distinctive blue baseball cap, standing alongside director Sam Mendes surveying some of the local scenery from the balcony of a hotel, and engaging in conversation about the preparations. The most prominent and colourful prop created by the production crew carpenters is undoubtedly a giant head-and-shoulders skeleton, complete with giant Mexican hat on the skull, which has been built on a temporary stage in the centre of Zocalo Square, with two smaller black-hatted skeletons sitting either side of the main model at the immediate front corners of the stage. At one point, two other colourful skull heads were placed nearby, in an area some way from the front of the stage.

In fact, some of the streets around Zocalo Square and nearby have witnessed numerous ‘Day of the Dead’ decorations and associated props, including giant skeletons standing and sitting around, almost as if they are waiting to hear the next clapperboard and the call for ‘action!’ Even though Zocalo Square itself is notably expansive in size, the main central skeleton still looks surprisingly large and eye-catching in the brilliant blue sunshine, and has created much interest on the part of passing locals and tourists. It must have come as a bit of a surprise to some of the visitors, as the traditional ‘Day of the Dead’ festival usually takes place in early November.

When filming re-commenced this week, some sequences were shot at the famous Gran Hotel Ciudad de Mexico, both inside and outside (which had also been used on Saturday), and also in Zocalo Square, with some further filming work carried out there on the ‘Day of the Dead’ festival. The latter involved using many of the numerous extras employed in the festivities scenes shot in the previous week, and again appeared to involve quite a complex logistical operation.

Some equally complex filming also started on the chase sequence, which takes place on foot and involves 007 chasing a white-suited Marco Sciarra (played by Alessandro Cremona). This involved some SFX work on Tuesday 24th, designed to create some smoke, dust and falling debris. Members of the crew also put up some large protective black covers across the streets, to shield off the area from onlookers and also for safety purposes.

According to local reports, Craig was filmed emerging through doors into some post-explosion chaos; looking a bit shaken but certainly not stirred, the super-cool agent 007 then gave chase to an initially stunned-looking Sciarri through a dusty and rubble-strewn side-street and into a main thoroughfare near Zocalo Square, where they came face-to-face with some giant inflatable skeletons, and then dodged their way past some celebrating ‘Day of the Dead’ festival crowds. It was also reported that Cremona’s white suit looked distinctly bloodied! Some of the main newspaper outlets in the UK, including both the Mail and the Daily Express, have already carried various photos of the action from the chase sequence.

In the meantime, dedicated Bond fans should look out for something very special to round off the week: the official 007.com website has announced that the first SPECTRE teaser trailer will be released on Friday 27th March at 11.45pm (GMT). It has also been reported by sources in the UK that ITV’s breakfast TV programme Good Morning Britain will have a behind-the-scenes and meet-the-cast special report next Monday morning, 30th March. You know the name, you know the number, now catch the trailer.