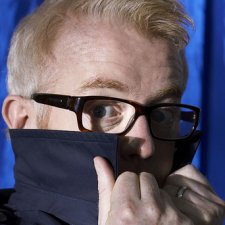 To help mark the 50th anniversary of Britain’s greatest film export, James Bond 007, the UK’s BBC will broadcast a special hour-long radio programme called ‘Seven Wonders of Bond’. It will air on BBC Radio-2 on the evening of Wednesday, November 21, at 10.00pm.

Hosted by Chris Evans, the radio programme will celebrate the seven main features that (in his view) have made 007 become one of the most popular movie franchises in cinema history. The ‘seven essentials’ will be: Bond, Locations, the Cars, Bad Guys, Music, the Gadgets, and the Girls. Various guests from the world of Bond will also be making contributions to the special programme.

Chris Evans is not only a BBC Radio DJ but, in his spare time, he is something of a James Bond and general film fan. He was one of the celebrity guests who attended the London premiere of ‘Skyfall’ on October 23, and he has attended Bond memorabilia auctions in the past. He is also a serious car collector and expert, with a large sports car collection (he is especially devoted to his Ferrari sports car). Earlier this year, he also purchased the classic car used in the movie version of Ian Fleming’s ‘Chitty Chitty Bang Bang’.

In addition to the above programme, BBC Radio-2 has two other treats for James Bond fans in the coming week. On the evening of Thursday, November 22, the radio channel will broadcast a 30-minute programme called ‘The Blagger’s Guide to James Bond’, where cultural expert David Quantick will take a light-hearted look the world of 007 and spying. It will be transmitted at 9.30pm.

Directly following this, on the same evening, at 10.00pm, BBC Radio-2 will conclude its 50th anniversary celebrations with an hour-long programme called ‘Bond Songs Are Forever’, in which lyricist Don Black explores what makes a great Bond song. Black, of course, has penned the words to four Bond songs – Thunderball, Diamonds Are Forever, and The Man With The Golden Gun, in collaboration with John Barry, and The World Is Not Enough, in collaboration with David Arnold.