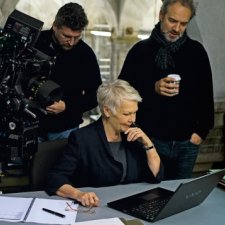 In an interview for the ‘Culture’ magazine of the UK’s Sunday Times newspaper (October 28), director Sam Mendes spoke about a key scene in ‘Skyfall’ and also about why he was happy to return 007 back to his roots.

Interviewed for the newspaper in a hotel in East London by Jonathan Dean, the ‘Skyfall’ director spoke at length about the pivotal scene where Bond meets the villain Raoul Silva (Javier Bardem) for the first time, which occurs about 70 minutes into the movie. Mendes also spoke about other aspects of the Bond universe.

The particular scene in question takes place in the movie on an island in the South China Sea, a place called ‘Dead City’ in the script. The inspiration for the island was apparently the real-life island of Hashima, where a coal-mining community once thrived until the mine became uneconomical to run. For the movie, however, Dead City was created at Pinewood Studios, as there was too much asbestos to film scenes on Hashima itself.

Mendes said that the speech made by Silva about killing rats was actually inspired by a story told to Mendes by the late cinematographer Conrad Hall, who had worked with Mendes on his movie ‘Road to Perdition’. Mendes said: ‘It always struck me as a brilliant metaphor for something’ – Bond and Silva (a former spy) are the last rats alive.

Mendes also told the Sunday Times interviewer that in the first draft of the script, Silva was introduced to Bond as 007 came to, having been knocked out, but Mendes didn’t think that was ‘theatrical’ enough. Mendes wanted something different; it was ‘a conscious decision to build up expectation’, and he added: ‘I said, you spend an hour waiting, you’ve got to give the man an entrance’. A whole room was also built to fit the length of the speech and the one-take shot. In fact, the speech delivered by Silva was designed to build the tension and then release it a little bit.

Mendes reflected: ‘One of the things I’m most proud of is that, in the midst of a Bond movie, with all the weight of audience expectation of action, we’re able to hold a seven-minute dialogue sequence. I think any movie has to breathe in and breathe out… it’s all about rhythm. It’s about having the courage to stop’. Mendes also explained that Silva’s speech was about ‘our fears in contemporary life’.

Turning to his general approach to helming a Bond movie and the appeal of the character, Mendes said the James Bond movies were still being made because Bond ‘represents something slightly more than what he first appears. I hope that’s articulated in the film. I wanted to give it that old style, but allow some of the humour back in, some of the wit of Fleming and the earlier pictures’.

On the production and filming aspects of ‘Skyfall’, Mendes also said: ‘We ended up shooting much more of it in England than we ever thought we would, and it felt like a truly homegrown film’. He continued: ‘It felt, in a sense, like we were bringing Bond back to his roots, both as a character and a franchise’.