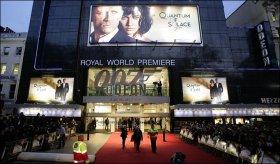 Daniel Craig and a host of stars strolled up the red carpet in the company of Princes William and Harry on Wednesday 29th October for the world premiere of “Quantum of Solace.”

The royal gala, which benefited charities Help for Heroes and the Royal British Legion, attracted big crowds hoping to see Craig in his second turn as James Bond.

The top brass from MGM, Sony and Eon Prods. all gathered for the screening before heading off to what promised to be a lavish afterparty held in Battersea Power station.

Dame Judi Dench, who again plays Bond’s boss M in the movie, was the first big name star to walk the red carpet, dressed in a glamorous low-cut black dress.

And as she turned in front of the cameras, she revealed a 007 spelt out in glitter on the back of her neck.

Bond producers Barbara Broccoli and Michael G Wilson, as well as director Marc Forster, also arrived to be greeted by an excited crowd.

Glamorous women were in abundance at the premiere, including model Elle Macpherson. Not to be outdone was 22-year-old British actress Gemma Arterton, who plays Agent Fields. The St Trinian’s star wore a revealing purple dress, cut low at the front and flowing at the back.

Robbie Coltrane, who starred in Goldeneye and Tomorrow Never Dies, said he was a huge Bond fan. He said: “I’m so looking forward to the film. I have done two Bond films, and I’m here to give a bit of support to Barbara Broccoli.”