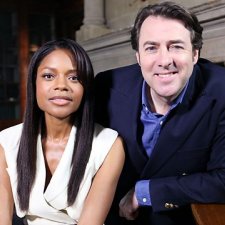 Bond is back – on the Box. TV chatshow host and movie commentator Jonathan Ross, who is also a major 007 aficionado, will host a James Bond SPECTRE special for the UK’s ITV-1 television channel on October 17th.

In the special hour-long TV documentary, James Bond’s Spectre, due to be transmitted in the popular primetime slot of 6.30pm on Saturday, October 17th in the UK, Ross will be seen interviewing Bond star Daniel Craig on the set of SPECTRE at Pinewood Studios.

There will also be the bonus of some behind-the-scenes footage from some of the main locations used in SPECTRE, including from Mexico, Rome, Austria, Morocco and central London. In addition, Ross will also offer some insights into previous entries in EON’s iconic series of movies, including on the gadgets, cars, villains and women.

The new Bond documentary is produced by Hotsauce Productions and ITV Studios. 54-year old Jonathan Ross has had a longstanding enthusiasm for everything James Bond over the years, starting some 20 years ago with the documentary In Search of James Bond, which was also made for the ITV network (and was first shown in December, 1995).

More recently, in June, 2015, British TV viewers were able to see a BBC-2 documentary hosted by Ross about the history of Pinewood Studios, where he was able to speak to a range of British film stars and veterans of the golden age of film-making at the studios, and was also given the opportunity to witness and participate in some of the stunt-work that takes place for movies made at the studios today (Pinewood has some of the best stunt artists and technicians in the world). And for James Bond aficionados, there was some very brief insights into the making of the new 007 movie, when he was able to interview Naomie Harris and Bond producer Michael G. Wilson, and was allowed to have a sneak preview of one of the Bond sets.

Although a number of Bond fans expressed disappointment at the slim Bond coverage in that particular documentary, it would appear that Ross was very much keeping his powder dry (so to speak). His exclusive and more detailed access to SPECTRE was kept under wraps over the spring and summer in order to provide a more in-depth programme for the new ITV-1 production due this coming Saturday.

Ross commented: ‘As a lifelong fan of James Bond, I’m thrilled to be involved with this exclusive behind-the-scenes look at what promises to be 007’s greatest adventure so far’.