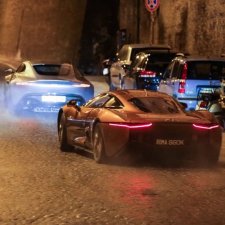 A new video blog has been released by the EON Bond producers which gives fans an insight into the spectacular car chase shot in the recent SPECTRE filming in Rome.

The viewer is given brief glimpses of some of the indoor preparations carried out on the vehicles used in the film and also of some of the practice stunt driving carried out as the cars were put through their paces before the main filming began; we are also able to see some of the high-speed chase scenes shot on location after dark on the streets of the Italian capital. A number of shots are seen from the perspective of the special camera car used in the filming.

Neil Layton reveals that they took delivery of eight bespoke Aston Martins, which were specially built for the film, while Chris Corbould says the Astons are ‘just pristine’ and ‘show their beauty’.

At one point Mendes comments: ‘I love the idea of this fantastic car being in a one-to-one battle with another incredible car from Jaguar, which is similarly extraordinary actually’. The Bond director continues: ‘So it’s a cat-and-mouse game through the night time streets of Rome, at great speed, between two of the fastest cars in the world’.

It was also pointed out that both of these unique vehicles have never been seen in action before.

At another stage in the vlog, Dave Bautista, dressed smartly as Mr. Hinx, comments on the chase: ‘It’s amazing. It’s one of those scenes that’s going to be very iconic. Just with two cars racing through the streets of Rome – I mean, how often do you see that? It’s one of those things you only see in a James Bond film’.

The Rome action sequences, which involve a chase and a kind of ‘duel’ between the two cars, were mostly shot in February and March. They saw Bond’s sleek-looking silver Aston Martin (licence plate number DB10 AGB) being chased and menaced by a determined Mr. Hinx in his equally distinctive-looking Jaguar (licence plate number ROMA 860K).

Some parts of Rome’s street network were regularly closed off at night during the complex filming, and the long chase, which takes the two vehicles through various narrow streets and into wider highways, also sees the cars speeding along the wide embankment pathway which runs parallel to the River Tiber, culminating in a hair-raising climax near a famous bridge.

And Rome, especially at night, looks as beautiful as ever.

Interestingly, Dave Bautista, speaking at the recent UK premiere of Avengers: Age of Utron, commented on his ‘Mr. Hinx’ character that: ‘It’s fun to play a bad guy. I think I make an interesting one – not your stereotypical bad guy’.