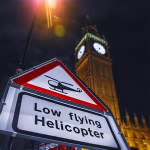 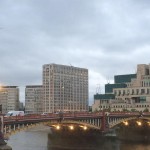 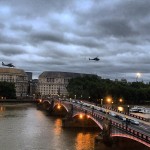 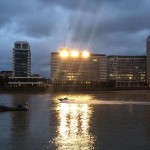 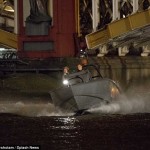 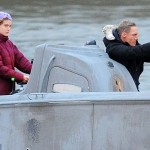 The extensive SPECTRE location shooting on the River Thames in London entered its final stages last weekend (13-14th June), with some further filming work carried out near the real-life MI6 headquarters building at Vauxhall and also between Vauxhall and Westminster Bridges. Bond’s speedboat was seen in action again on the waterway and was accompanied by helicopters in the sky just above. The JBIFC understands that a final evening of filming (originally reserved as a back-up date) will also now be utilized on 21st June and into the early hours of the 22nd.

The JBIFC’s special operative in the area was again on hand to witness the activities on 13-14th June, and has just submitted the following briefing for green-ink signature by 007’s boss ‘M’. Warning: There may be one or two possible minor spoilers.

Sam Mendes and the SPECTRE filming units have certainly made full use of the opportunities afforded by Britain’s capital for the climax to the 24th James Bond adventure. Given all the filming activity on the Thames and in the general Westminster area in recent weeks, it has inevitably drawn various comments in the local London press. One columnist, Nick Curtis, writing in the London Evening Standard (10th June), commented: ‘Those of us who live in close proximity to Vauxhall Bridge have had several weeks of Daniel Craig (or at least his stunt double) razzing up and down the Thames…’. However, referring to the helicopters used for the filming and ‘the glare of huge arc lights’, Curtis added: ‘Any disturbance caused is offset by pride in the benefits the franchise brings to London’.

The weekend of 13-14th June saw further work on the Thames, and the JBIFC understands that the 13th June was an addition to the original shooting schedule. Events quickly kicked off on the evening of Saturday, 13th June, when the SPECTRE second unit began activities on the Thames near Lambeth Bridge and up to Westminster Bridge, using the stunt doubles for Daniel Craig and Lea Seydoux seen in the shooting conducted on previous weekends. After various practice runs in the Bond speedboat during the remaining evening daylight hours, the main work began from around 10.00pm onwards.

Sunday 14th June saw an even busier round of second unit filming. In addition to the stunt doubles in their boat on the water, this time the shooting also involved the use of two helicopters (a camera helicopter and the G-LCPL helicopter mentioned in our previous filming reports). Although Mendes was not involved in this particular round of filming, it still seemed very appropriate – given that Mendes is such a cricket enthusiast – that for this evening’s filming work the two helicopters were allowed to use a spot in a public park near the Oval Cricket grounds as their temporary base. The Astro Turf sports area in Kennington Park, which is not far from the Oval grounds (and is tucked away in the district just behind the real-life MI6 building), was used for the landing, preparation and re-fuelling of the two helicopters. Although the Astro Turf site, which was firmly secure behind high wire fencing, was scheduled to see the helicopters land there from 4.00pm onwards, they did not actually land there until well after 5.00pm. Indeed, between 5.00-6.00pm, one of the helicopters was still making numerous practice circuits high up in the sky over the MI6 HQ and general Vauxhall-Westminster Bridges section of the Thames.

The actual filming activities using the boat and two helicopters began from mid-evening onwards. There was careful regulation of the main access points along the embankment on the both sides of the Thames. The popular Queens Walk footpath (which runs along the embankment between Lambeth and Westminster Bridges, parallel to Parliament on the opposite side) was completely closed off to pedestrians from around 7.00pm until the early hours of the morning. Similarly, Lambeth bridge was completely closed to both pedestrians and motorists from mid-evening onwards, while both Westminster and Vauxhall Bridges also saw some intermittent closure of pavements at times.

The filming saw regular high-speed takes of the 007 boat zipping down the Thames from Vauxhall to Westminster, followed by the two helicopters travelling in the same direction. The ‘convoy’ would then travel back up the River to Vauxhall and the MI6 building to take start positions once again beside Vauxhall Bridge. At times, the casual drinkers who were using the ‘Tamesis Dock’ floating pub on the river were certainly able to see some of the complex manoeuvres taking place. As the hours ticked down towards midnight, the few hardy onlookers still around at that time of night (including this author) were also able to get some excellent views of the takes as they happened, especially from the Millbank side of the river.

Standing at one point on Vauxhall Bridge at midnight as the two helicopters hovered near the MI6 HQ like two giant birds of prey, the sight and (loud) sounds will remain with me for a very long time to come. And, at this particular stage, as the two helicopters hovered for a while just before their final run down the Thames, it was also very entertaining to see the drivers of late-night red buses slowing down briefly on Vauxhall Bridge, as their few passengers gaped in awe at what must have been quite a dramatic surprise. Let’s face it: it’s not all that common to suddenly encounter two menacing-looking black helicopters hovering near a major bridge in London really late at night!

The filming activities over the course of the Saturday and Sunday, especially the daylight ‘rehearsal’ sequences, certainly saw some good photos appearing in the UK press. The Daily Mail online (15th June), for example, carried a nice range of photos, while The Times (June 16th) carried a dramatic and quite beautiful photo of the two helicopters hovering in daylight near Big Ben.

Although the second unit filming was not quite completed, we understand that the footage that was taken will be matched to the material already taken on previous weekends in London and also at a reproduction of Westminster Bridge built at Pinewood Studios. One thing is abundantly clear: SPECTRE will bring a whole new perspective to the iconic features of the River Thames and its architectural surroundings, both for general cinema audiences and for fans of 007. And nobody does it better!