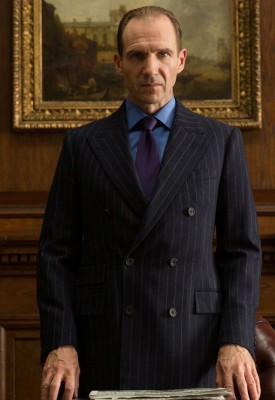 The Oscar-nominated stage and film actor Ralph Fiennes, who has played Gareth Mallory (MI6 boss ‘M’) in the last two James Bond movies, has made some brief comments about the next entry in the EON franchise, Bond 25, and he is clearly ready to report for duty.

The distinguished thespian has been busy in Britain promoting his new biopic about the late ballet dancer Rudolf Nureyev, The White Crow, which Fiennes both directed and also took a key supporting role in (as ballet master and Nureyev mentor Alexander Pushkin).

The new movie, which stars Oleg Ivenko as the young Nureyev, was premiered in Mayfair, central London, on Tuesday evening, 12th March. It focuses on the early life and career of Nureyev, the acclaimed ballet dancer who was taught by the equally famous dance teacher Pushkin, and who eventually defected from the Soviet Union in 1961 to find work and a new life in Paris, and also joined the Royal Ballet in the UK.

As well as being quizzed closely about the challenges he faced making and directing the new movie (at one point Fiennes, against all the odds, was even able to secure unprecedented permission to shoot in the hallowed ‘Rembrandt Room’ at the Hermitage Museum in St. Petersburg), Fiennes has also been asked by a number of interviewers about his role as ‘M’, and the likely dates of his involvement in the upcoming 5th Daniel Craig 007 adventure.

Fiennes, who has been filming the Kingsman spy prequel, The Great Game, told the ITV channel’s Lorraine breakfast show (13th March) that he expected his role as ‘M’ to begin shooting in May: ‘Well, I know we are shooting this year. I’m genuinely not being coy. I have not yet got a script and I don’t have a start date’. But he added: ‘I’m looking forward to starting, I think, some time in May or June’.

The actor was also asked similar questions in an interview he gave to the BBC’s Newsnight programme on 15th March. Quizzed at one point by the programme’s Culture Editor Stephen Smith about Bond, Fiennes responded by pointing out that: ‘There’s as much security around a Bond production as there is in MI6. I don’t know the name of the film and actually have not had access to the screenplay yet’.

Fiennes, when also asked a more general question about whether there should be a black or female Bond (the current obsession of a number of journalists these days) responded firmly: ‘I’d like to see a great black actor inhabit a Bond-like persona, but not necessarily it be in the same franchise’. He continued: ‘I think if we could remake the idea of a Bond as a woman, or as an actor of any ethnicity [it would be] in another vehicle’.

Interestingly, Fiennes’s comments echo very similar views expressed this week by Eva Green, who played Vesper Lynd in Daniel Craig’s first 007 film Casino Royale. The French actress, who was in Hollywood for the premiere of her latest film, Disney’s Dumbo, directed by Tim Burton, was at one point asked about her own thoughts on a ‘female’ Bond. She commented: ‘I’m for women, but I really think James Bond should remain a man. It doesn’t make sense for him to be a woman’. This, in turn, echoes comments made by Dame Judi Dench, Rosamund Pike, and Rachel Weisz, Daniel Craig’s wife. Weisz, for example, speaking in February, 2018, said she did not believe that a woman should take over from her husband, Daniel, but that females should instead ‘get their own stories’.

Ralph Fiennes has also spoken in some detail about the sheer challenges of being both a director and an actor. He told the London Evening Standard at the premiere of The White Crow that he felt daunted to take the role of the ballet master Alexander Pushkin: ‘I definitely felt challenged because I don’t come from ballet. I admit it was scary’. To help prepare for the role, he took ballet instructions from a dancer at the Royal Ballet company and also watched archive footage of Pushkin teaching.

As for Nureyev, the main focus of the movie, Fiennes said he felt ‘unbelievable pressure’ to make a film about the iconic dancer: ‘Sometimes I thought, I’m really stupid, really stupid here because he’s so well known, so well documented and there are so many people still alive who knew him and worked with him. But I also thought, well, not many people know about his student life. They don’t know about him being taught by this famous teacher Pushkin and they don’t know much about where he came from’.

And, in one of the most detailed interviews he’s given in quite some time, Fiennes was also profiled in the Telegraph magazine (9th March), and spoke at some length about his general acting career and the challenges of combining the roles of director and actor. Interviewed in a Shoreditch loft studio not far from his home in London, the actor revealed to the magazine at one point how difficult it can also be to obtain sufficient funding for movies such as The White Crow in today’s economic climate: ‘I didn’t really want to be in it’, he said. ‘But I felt this creeping pressure and although I had a cast of wonderful Russian actors and dancers, the Russian producer said to me, “If you want Russian investment then we need Western names, why aren’t you in it?”‘

He also admitted that, in order to make the films that he has especially wanted to make, he has had to put his own money into them. He has directed himself, for example, in the BAFTA-nominated Shakespeare play Coriolanus (2011), and directed The Invisible Woman (2013), about Charles Dickens. Such ventures were helped by his appearances in the more commercial Harry Potter and 007 movies.

In some other comments made to the UK’s media to help promote The White Crow, Fiennes has also revealed that, after his appearance as ‘M’ again in Bond 25, his next film project after that will be The Dig with Nicole Kidman, and then he plans to devote the the year 2020 to theatre roles.

Ralph Fiennes has always been something of a Bond fan himself over the years. In 2011, for example, he revealed: ‘I love the Bond books particularly. I like the books even more than the films. I like the darkness of the books. But I’ve also enjoyed all the films’. He said he had ‘vivid’ memories of seeing George Lazenby in On Her Majesty’s Secret Service (1969). He also has a sense of humour about his ‘Bondian’ interests. While he was preparing to shoot Skyfall, he was spotted spending some time training in the gym. And members of the gym reported later that, when his mobile phone rang, its musical signature tune was… the James Bond theme! 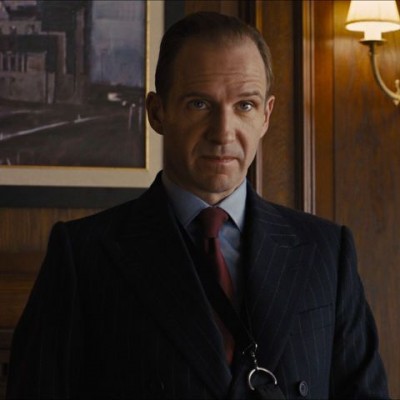