Racing in Rome: New issue of MI6 Confidential goes behind the scenes with SPECTRE unit 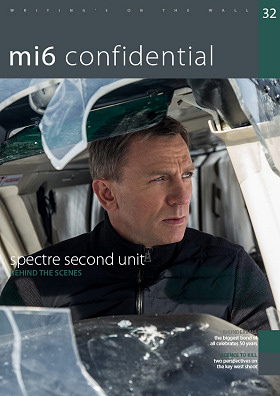 Double-O heaven! Sam Mendes had a particular vision of how to mount a spectacular race in the streets of Rome, and the behind-the-scenes story of how it was filmed in the eternal city is just one of the great articles in a new issue of the glossy Bond magazine MI6 Confidential, which has just been published.

The latest edition (issue no. 32, October, 2015) introduces readers to the team that brought the vision of the exciting night-time car chase in Rome to life: the 300-strong SPECTRE second unit, headed by Alexander Witt, who spent a good few weeks last March planning and implementing what promises to be one of the most visually-striking car chases ever seen in a 007 movie.

Another highlight of the new issue of MI6 Confidential is an article recounting the little-known story of Donald Westlake, author and screenwriter, who drafted a treatment for Bond 18, the film that would become Tomorrow Never Dies, Pierce Brosnan’s second adventure as 007.

For fans of Timothy Dalton’s version of James Bond there is also a really fascinating look back at the Key West filming for Licence To Kill, with some very rare photos and artwork. The magazine also takes us back to the 1960s and celebrates Sean Connery’s fourth outing as 007, Thunderball, as 2015 marks its 50th anniversary.

Featured in the new issue are:

This superb magazine is a must-have for all James Bond fans.

Issue no. 32 is now shipping around the world. To order online, visit: 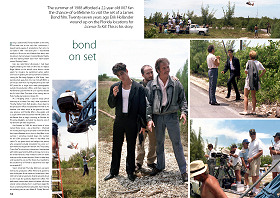 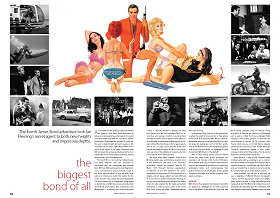