Quantum in Seven: Looking back on Craig’s second Bond film

The UK’s main ITV channel has a Bond season to mark the summer and, as Quantum of Solace (2008) is rolled out as part of this, we take the opportunity to look back on Daniel Craig’s second James Bond adventure.

Although in many ways a direct sequel to Casino Royale, Craig’s second 007 film, directed by Marc Forster, proved to be radically different in style, editing and length. While Casino was mainly a love-story with a backdrop of betrayal, Quantum was fundamentally about revenge, with a backdrop concerning ‘big’ issues (such as water and oil and the role of corporations). Even today, twelve years later, Quantum tends to divide 007 fans, with some Bond aficionados remaining very loyal to the movie, while others tend to be more sceptical.

The JBIFC offers seven bullet-points on the known and perhaps less well-known aspects of the film, which took its title directly from one of Ian Fleming’s short stories, which had originally appeared in the Bond creator’s short-story collection For Your Eyes Only (1960).

001: Pre-production on Quantum included training Craig for the spectacular car chase scenes in the film’s opening sequences in Italy; this involved Craig testing out various high-speed manoeuvres in an Aston Martin at Millbrook Proving Ground in Bedfordshire, in England. He was very happy to do so! Craig was also given some training and coaching at the controls of a jet-powered speedboat for another key sequence in the movie. This rehearsal training took place on Horley Lake in Surrey.

002: As the director Marc Forster later admitted, one of the most challenging aspects of embarking on the new 007 production was that, when they began, there was not a finished script. Moreover, during the course of production, industrial action by screenwriters in Hollywood (i.e. by the Writers Guild of America) also became a problem for finessing aspects of the Quantum screenplay, as only Forster and Craig could rework written scenes.

003: Bond productions have a history of utilizing parts of central London which is, after all, just 30 minutes or so away from Pinewood Studios. For Quantum, ‘M’ (Judi Dench) and Bill Tanner (Rory Kinnear) filmed a scene outside the residential parts of the Barbican arts centre, which is also famous for its distinctive architecture. Similarly, the scene where the British Foreign Secretary reprimands ‘M’ was shot at the famous Reform Club in Pall Mall, which had been previously used to double-up as ‘Blades’ in Die Another Day.

004: One of the more controversial aspects of the movie, in the eyes of the critics, was the very fast-paced editing. Marc Forster defended this by later revealing that what he wanted to do was to have the audience, at times, ‘disorientated’ in the same way as Bond, and to be asking ‘what is going on?’ This was the aim behind, for example, the early car chase sequence. Forster also said it was important for the audience to be experiencing, like Bond, serious concerns over trust and betrayal. Who could he still trust?

005: One of the toughest locations used in Quantum was the Atacama desert in northern Chile (where Bond leaves the villain, Dominic Greene, played by Mathieu Amalric). This was doubling-up for a water-starved ‘Bolivia’, where the 300-strong crew was also able to make use of a remote observatory and hotel. The desert is one of the driest places on earth and is 800 feet (244 metres) above sea level. This meant that the crew had to deal with very dusty and thin air, and also had to be especially wary of how the sun could soon burn exposed skin.

006: Marc Forster, speaking in 2009, said Fleming’s title and the main theme of his short story had ‘grown on him’ when he read it, and he had sought to capture Fleming’s theme of ‘failed relationships’ in the original short story as an underlying theme in the subsequent Craig movie. But Forster also said another key element was that Bond was up against large ‘unseen forces’ i.e. the ‘Quantum’ organisation, which in turn was manipulating whole governments, and 007 also had to be careful about rogue and shadowy elements in the CIA.

007: According to figures released by the UK Film Council, Quantum of Solace contributed to a 5% increase in British Box Office takings during 2008. Overall, the movie raked in a very impressive £51m in the UK during 2008, making it the second most popular film in the country after Abba: The Musical. Interestingly, Bond also beat the Bat (so to speak): the batman movie The Dark Knight came third, making £49m in the UK. More generally, it is estimated that Quantum had a worldwide gross of $586m, which was just short of Casino Royale.

Composer David Arnold, who was working on his fifth 007 movie, recently revealed in a special Bond music series on the UK’s Scala Radio that he had discussed the music with director Marc Forster months before the production even began, and that the director wanted him to radically depart from Bond music composing ‘tradition’: Arnold was asked to compose themes for characters and situations based on ‘montages’ that would be sent back from the various locations for the film: ‘I was to write not to film, but to the concept… it was quite liberating in a way’. Arnold recalled that he had really enjoyed working this way, as it was so different. 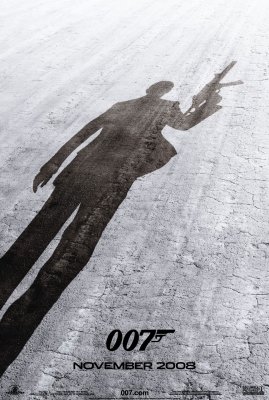