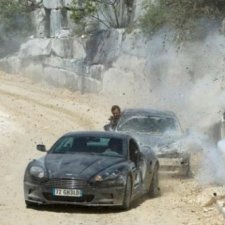 James Bond star Daniel Craig’s aggression and steely determination behind the car-wheel in the 007 films is no illusion, according to the man who trained him.

With just days to go before the London opening of the highly successful Bond in Motion exhibition on March 21, Ben Collins, the stunt driver who has worked on the previous two James Bond movies, spoke to The Times newspaper (March 14) about Craig’s impressive driving skills.

Collins, otherwise known as ‘The Stig’ from BBC TV’s driving programme Top Gear, said that the James Bond star would not only be faster than all the Top Gear presenters but also has the skill to beat almost all the people that Collins coached during his seven years on the BBC’s popular show.

Collins taught Craig how to drive an Aston Martin DBS in preparation for the 2008 Bond adventure Quantum of Solace, and revealed that the only other actor he had taught who had a similar instinct for speed was the U.S. actor Tom Cruise.

Asked whether Craig would also outperform the main Top Gear presenters, Collins responded: ‘Oh, God, yeah. The presenters are very good at what they do but they’re no speed merchants. They did do a 24-hour race and they did very well and ended up on the podium, but Daniel’s instinct is good. He’s got a taste for that bug. It obviously helps. You can see that in his general approach to all the stunts he gets involved in, including things like the wire work’.

Collins said that he spent most of his time on Top Gear encouraging various celebrities to drive faster: ‘With Daniel, it was the other way round. He was certainly not shy of going fast’. Collins added that they did a lot of work with Daniel at Dunsfold Aerodrome (where many of the Top Gear laps are filmed and which has also been used for Bond film sequences): ‘He did a full workout, from high-speed driving to the evasive stuff, and he really took to it’.

Collins also commented on Craig: ‘He’s Bond. A lot of the stuff you see is him, so it’s right that you believe it’s him’.

Collins revealed to The Times that his own most memorable role as a Bond film stunt driver was driving the Aston Martin DB5 in Skyfall: ‘ “Never meet your heroes” is quite a good expression for vintage cars from the Sixties and Seventies, but the DB5 doesn’t role as much as some of the muscle cars from America. It’s like being in a boat. It’s got a big, wooden steering wheel and it does not roll round’. Collins added: ‘The hardest we pushed it is that first scene when it leaves the garage’, but the famous Bond car zipped through the streets of London.

Collins spoke to The Times as some of the cars that he helped wreck were being installed for the Bond in Motion exhibition, which will open at the London Film Museum. He explained that, for Quantum of Solace, they had 12 Aston Martin DBS cars and ‘destroyed pretty much all of them’.

Collins also said that too much CGI fakery in films generally gets spotted by audiences, but: ‘The joy of the Bond movies is that you know it’s not a CGI blob going across the screen’.

The updated Bond in Motion exhibition, which originally ran at the Beaulieu Motor Museum in Hampshire, England, opens at its new site at the London Film Museum on March 21, 2014.