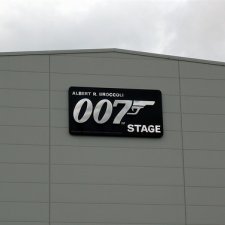 Pinewood Studios, located in the county of Buckinghamshire in Britain, and the famous UK home to the 50-year old James Bond franchise, has had its latest expansion plans blocked by the local authorities.

The Studios, which is hoping to be a key host of the new Stars Wars movie to be filmed in Britain in 2014, and also wants to accommodate Bond 24 when it begins production, had its latest application for planning permission to expand rejected by South Buckinghamshire District Council, losing the bid by just two votes (six Councillors voted against and four voted in favour). The vote was held on Wednesday, May 15. The Council stated that it still had ‘concerns’ over the proposed development of the site, including worries about the possible impact on ‘greenbelt’ land.

As the JBIFC reported previously, supporters of the expansion plan, including Skyfall director Sam Mendes, saw the plan as offering a major boost to movie studio facilities in the UK, and the company which owns Pinewood Shepperton have expressed fears that the 007 franchise could possibly move elsewhere, as film-making capacity in the UK has reached its limit, and studios in other countries are keen to woo investment from filmmakers in a highly competitive international market.

Pinewood’s chairman, Lord Grade, responding to the rejection decision, said he was ‘very disappointed’ that they could only convince four out of the ten local Councillors that voted, as ‘it is important to create jobs and invest in the creative industries’. He added: ‘It was really very close and it was more about emotion than rational argument’. He also said he had found the debate ‘depressing’ and he could not understand the thinking of some of the Councillors: ‘If you were trying to build the original Pinewood from 70 years ago today these people would try and stop you’.

When asked about the ‘greenbelt’ concerns, Grade challenged this and said the land in question was ‘blighted grazingland’ on the edge of the M25 motorway. Lord Grade also strongly hinted that Pinewood intends to appeal against the decision.

The company which owns Pinewood and Shepperton, together with additional TV studio facilities in Teddington in South-West London, is run by Lord Grade and Ivan Dunleavy. They first submitted ambitious expansion plans for Pinewood in 2009. These included proposals for a mix of housing and ‘streetscapes’ that would double up as movie sets, but these were rejected. Another version of the expansion plan was also ruled against by central government in London in January, 2012.

The latest expansion plan put forward by Pinewood had dropped the housing element of the original plan, and claimed that the new blueprint would create 3,000 new jobs and add £150m a year to the UK economy. It also highlighted the considerable ‘knock-on’ effects and benefits from financial investment in the local economy when major Hollywood movies are shot at Pinewood, including the 007 films, which often make use of the local countryside areas for location purposes.

However, despite there being less opposition to the new plan this time round, it was clearly still not enough to persuade local Councillors to pass it. It now looks as if Pinewood will have to try another day.

Bond Trivia Note: For the secret volcano crater base in the fifth 007 movie, You Only Live Twice (1967), Albert R. Broccoli handed Ken Adam $1m (a phenomenal sum at the time). The volcano set designed by Adam and constructed at Pinewood was 130 foot high and had a diameter of 440 foot, and local residents from miles around regularly came to the perimeter fence of the Studios just to catch a view of the massive set.