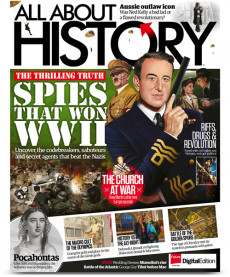 The new issue of All About History, the popular history magazine published in the UK, briefly explores James Bond creator Ian Fleming’s role in World War Two, as part of a general article on the ‘Spies That Won WWII’.

Clearly keen to tap into the James Bond connection, the magazine has included a painted image of Fleming on its front-cover in a very ‘Bondian’ pose, holding a gun across his chest.

The article, written by Will Lawrence and Mike Haskew, investigates and profiles the spies, secret agents, code-breakers and saboteurs who made up Britain’s ‘secret army’, a diverse body of dedicated men and women who fought in the shadows in a bid to win the war against Nazi Germany.

As Britain stood alone in 1940-41, after the disaster that had unfolded in Europe and the emergency evacuation of soldiers from Dunkirk, the new Prime Minister, Winston Churchill, increasingly turned to the UK’s ‘special forces’ to help try and turn the tide of war in Britain’s favour. The magazine article has chosen 20 of the most notable of these agents to ‘reveal their stories’.

Lawrence and Haskew kick off their article with Ian Fleming who, they argue, ‘enjoyed a distinguished career in military intelligence’. They note (as indeed many of Fleming’s previous biographers have noted) that when conflict broke out Fleming was appointed assistant to Rear-Admiral John Godfrey, the director of British Naval Intelligence, and took up a position in the special branch of the Royal Naval Volunteer Reserve. Importantly, Fleming helped develop strong ties between the UK and USA in World War Two and ‘was heavily involved’ in the formation of 30 Assault Unit, the British commando group tasked with gleaning vital intelligence from behind enemy lines.

The authors also note that Fleming ‘is also widely credited’ as the author of the Trout memo, which culminated in ‘Operation Mincemeat’, a highly successful deception operation designed to throw the Germans off the scent of Allied plans to invade Sicily in 1943. They also point out that Fleming’s knowledge of secret operations found voice later in his James Bond novels, and note that it is thought that the character of ‘M’ in the 007 books was based on Fleming’s wartime boss, Rear-Admiral Godfrey.

Interestingly, as part of their general article, Lawrence and Haskew also include brief profiles of Fleming’s brother, Peter Fleming, and also of Merlin Minshall. Peter Fleming was a famous travel writer who also worked as a wartime intelligence officer and helped set up Britain’s ‘Auxiliary Units’, secret bands of men who would have fought a resistance war had Britain been invaded by the Germans.

Merlin Minshall was an adventurer, car racer, and sailing expert who worked under Ian Fleming for a while in British Naval Intelligence. Minshall, a suave and charismatic character who died in 1987, ‘initially denied that Fleming had modelled James Bond after him but later went on to embrace the idea’. Minshall penned the autobiographical Guilt-Edged (1975), where some of the details of his time as an agent were described. 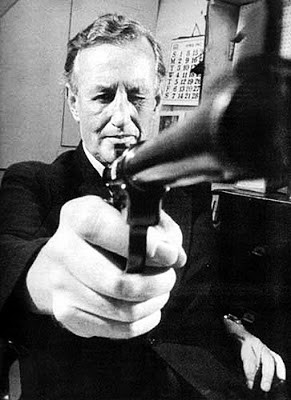 Fleming in a publicity photo for his 007 novels