On Her Majesty’s Service: The BBC’s brief bond with 007 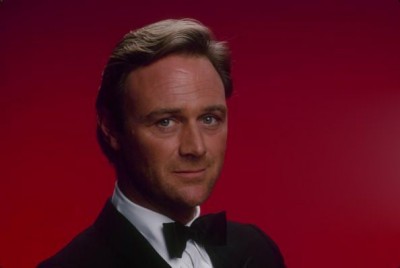 Not many people realise that Ian Fleming’s James Bond once saw a very brief BBC-TV incarnation, and this alternative version remains a bit of a ‘lost moment’ in 007 history. Fleming’s famous literary hero appeared in a popular BBC arts programme in 1973, and was played by the film and theatre actor Christopher Cazenove.

We first told this story in the JBIFC Newsletter in April, 2010, and it’s worth airing it again for those who have not come across it before.

Back in 1973 Roger Moore had just become the latest official big-screen 007 and an extraordinary new era in James Bond cinema history was opening up. Interest in Ian Fleming’s iconic creation remained very high, especially as the relevant title of the late author’s James Bond novels was often re-issued as a film tie-in with each new EON movie. Unsurprisingly, the BBC decided to give some critical appraisal to the literary interpretation of 007, and try and place him in the long tradition of British heroes and their adventure thrillers, a genre which stretched back to at least the 1920s.

In October, 1973, the BBC’s high-brow literary and arts programme Omnibus devoted a special edition to what it called ‘The British Hero’, which traced the evolution of the ‘heroic’ figure in British popular literature, and this included an analysis of Ian Fleming and how he had visualized and structured his spy fiction. Interestingly, the programme staged extracts from Fleming’s Bond novels Diamonds Are Forever (1956) and Goldfinger (1959), with Christopher Cazenove as 007.

Christopher Cazenove (1943-2010) was an Eton-educated British actor who carved out a career in TV, film and the theatre, and who possibly became best known for his role as the scheming businessman Ben Carrington in the U.S. TV series Dynasty in the 1980s. He had first come to wider public prominence in the early 1970s when he played a dashing soldier in the BBC-TV military drama series The Regiment (1972-73).

Some Bond aficionados had a very rare opportunity to see the Omnibus programme again when it was screened as part of a ‘Bond at 50’ event held at the National Film Theatre (NFT), in central London, back in 2003. Other guests at the NFT event included the Bond director John Glen, the Goldeneye cinematographer Phil Maheux, the Dr. No actress Zena Marshall (now sadly deceased), and the late author John Gardner who, of course, reinvented Fleming’s literary hero for a series of 007 continuation novels in the 1980s.

Quite what John Gardner made of seeing a very young-looking Cazenove strapped to a table and being threatened by Auric Goldfinger’s circular spinning saw (as per the Fleming novel) is difficult to say, but he seemed as bemused as the rest of the NFT audience. The rather distinctive ‘1970s’ costumes were certainly entertaining.

The circular saw sequence from Fleming’s novel Goldfinger, which was set in what looked like a surgical theatre, had Oddjob dressed in surgeon’s attire, but still with his black bowler hat, while Goldfinger was played by the tall and distinctive-looking Scottish actor Graham Crowden (1922-2010), who was also dressed in a doctor’s outfit. Another ‘doctor’ was also present. It was quite an atmospheric scene in many ways, especially as the chain-saw rapidly approached Bond’s vital parts, but an evil female nurse also standing nearby licked her lips rather more than necessary to be fully credible! Oddjob also appeared a little wooden. Frankly, who could really beat Harold Sakata’s memorable film portrayal?

To be fair, though, this was British TV, with its rather limited 1970s budgets, and the concern to remain faithful to Fleming’s original vision was admirable. Cazenove’s 007 looked suitably alarmed about his possible fate. The British actor’s version of Her Majesty’s top secret agent was also seen scaling down the side of the luxury liner Queen Elizabeth and then breaking into Wint and Kidd’s cabin, where the vicious duo were holding Tiffany Case and torturing her (as per Fleming’s fourth novel). A shootout ensued, with both hoodlums dying. Miss Case, however, recovered sufficiently quickly to allow Bond to join her in the bath-tub immediately after!

The scenes with Cazenove were clearly staged to fully recapture the dark, brooding nature of the original Fleming novels from the 1950s, and they went a good way to achieve this objective. Somebody in the BBC’s Omnibus research team had evidently gone to much trouble in 1973 to re-stage the sequences for British TV, demonstrating a real eye for ‘Bondian’ detail.

There were later consequences for Cazenove after his brief dalliance with 007: in the 1980s, when Roger Moore’s tenure as Bond seemed to be drawing to a close and the media were doing their inevitable wave of ‘who will be the next Bond?’ stories, Cazenove’s name would sometimes pop up on their lists of possible candidates. He didn’t seem to mind! And here’s a nice fact: the role of Goldfinger was not Graham Crowden’s only brush with the world of 007. He later played the First Sea Lord in Roger Moore’s official big-screen Bond adventure For Your Eyes Only in 1981.

In one of his very last interviews, given at his London office just several months before he died in 1964 (and later published in December that year), the Bond creator Ian Fleming explained at one point: ‘I didn’t intend Bond to be a particularly likable person. He’s a blunt instrument in the hands of government. He’s got his vices and few perceptible virtues except patriotism and courage’. 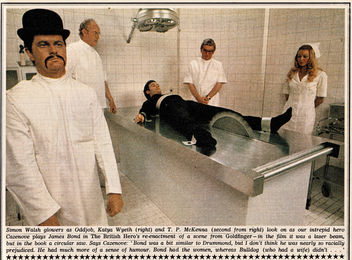 A rare glimpse of the Omnibus 1973 version of Goldfinger