On Her Majesty’s Musical Service 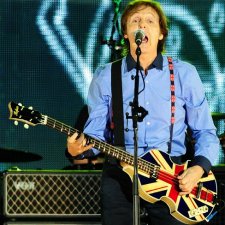 The concert was staged around the famous Queen Victoria Memorial, just outside Buckingham Palace in the capital city, as part of the events held in Britain to mark the 60-year reign of Queen Elizabeth II on the British throne.

12,000 people had won special tickets in a ballot for the concert, while it is estimated that crowds of up to 250,000 people also descended on both the nearby St. James’s Park and Hyde Park, and also the Mall (the wide avenue that leads up to the Palace), to watch the concert on big screens specially set up for the evening.

Performers very familiar to James Bond fans included Sir Tom Jones and Grace Jones, as well as Dame Shirley Bassey and Sir Paul McCartney. Dame Shirley sang (what else on a Diamond Jubilee?) the iconic theme song to ‘Diamonds Are Forever’, while Sir Paul’s songs (which constituted the final act of the concert) included a rousing and spectacular version of ‘Live and Let Die’.

What made this version of the song to Roger Moore’s first Bond movie so special was that it was accompanied by an amazing display of pyrotechnics – loud explosions, lazer lights, and fireworks – which clearly thrilled the watching guests and crowds.

In addition to this, the Diamond Jubilee celebrations also included some Bond music being played at the special Thames Diamond Jubilee River Pageant held on Sunday 3 June, which saw an orchestra on one of the special barges play 007 music as it passed the famous MI6 HQ near Vauxhall Bridge, along the Thames Embankment.

Bond at the Olympics

Britain’s favourite secret agent will also play a part in the upcoming Olympic Games 2012 opening ceremony, which will also be held in London. With music put together by former Bond composer David Arnold, it is expected that the accompanying special film made for the ceremony to celebrate the best of British culture will include a role for Daniel Craig’s 007.

The Bond connections do not stop there. The opening ceremony will also feature pop band ‘Duran Duran’ (who sang ‘A View To A Kill’ in 1985), and now Sir Paul McCartney has just confirmed that he will play at the special closing ceremony to the 2012 Games.