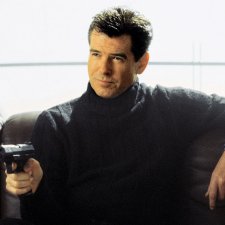 With a new exhibition due to open at the Barbican in London, the UK’s ‘Observer’ newspaper profiled some of the most distinctive outfits from the 007 film series on June 24th.

As chosen by the newspaper’s film critic Jason Solomons, with some extra commentary by Lindy Hemming (who co-curated the new exhibition), the article identified ten key outfits from the long-running EON series.

First up (in no particular order) was Bond’s cashmere ski outfit, as worn by Pierce Brosnan in ‘Die Another Day’ (2002). According to Solomons, ski wear is something of a Bond staple – ranging from the Billy Bognor blue ski suit worn by George Lazenby in ‘On Her Majesty’s Secret Service’ (1969), through to Roger Moore’s yellow all-in-one in ‘The Spy Who Loved Me’ (1977). Commenting on Brosnan’s outfit, worn by 007 at the villain’s ice palace, Lindy Hemming told the newspaper: ‘This lovely jumper needed to be comfy and loose – Bond always conceals something underneath’.

Other key constumes and outfits covered by the article included the Prada dress worn by Camille in ‘Quantum of Solace’ (2008), Bond’s golf clothes in ‘Goldfinger’ (1964), Craig’s memorable blue trunks from ‘Casino Royale’ (2006), Moore’s Safari-style suit from ‘The Spy Who Loved Me’ (1977), Bond’s Sandown hat (the trilby he wore in the first three Bond movies), Major Amasova’s cocktail dress (1977), Blofeld’s Mao suit, first worn by Donald Pleasence in ‘You Only Live twice’ (1967), Bond’s black tie (1962-present), and Scaramanga’s immaculate white linen suit, as worn by Christopher Lee in ‘The Man With the Golden Gun’ (1975).

On the latter outfit, Lindy Hemming pointed out that Scaramanga’s suit actually paid a nodding compliment to Ian Fleming’s Bond of the books. Interestingly, Jason Solomons, in his commentary, also told readers that, in terms of clothes, Roger Moore was probably the most ‘on trend’ of all the Bonds, ‘which is why his outfits have dated the most’.

The new exhibition, entitled ‘Designing 007: 50 Years of Bond Style’, runs at the Barbican in central London from July 6th to September 5th, 2012.