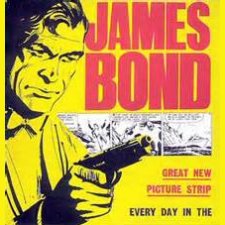 Eyes only, 007. A press release issued on October 7th by Dynamite Entertainment, a leading publisher of English language comic books and graphic novels, has revealed that the company has been granted worldwide rights to publish brand new visual adaptations of the classic Ian Fleming James Bond adventures, but also with some fresh material about 007’s background. These will take the form of comic books, digital comics and graphic novels.

The company has entered into a partnership with Ian Fleming Publications Ltd (IFP), the company that owns and administers the literary copyright of Bond author Ian Fleming’s works, including his fourteen 007 books. It follows shortly after IFP announced a few days ago the return of James Bond in a brand new novel to be written by Anthony Horowitz, set in the 1950s, but partly based on unused Fleming material.

Dynamite can now create a range of new visual material starring James Bond, re-living the Fleming stories and exploits that have thrilled fans for over half a century. Interestingly, the 1950s would also appear to be the backdrop with which Dynamite can also explore James Bond’s early years. According to the press release, these additional new stories will draw inspiration from the Fleming canon to explore Bond’s ‘origins’: his raw early years before the adventure described in Fleming’s debut novel Casino Royale. The press released added: ‘Some other familiar faces from the expansive 007 mythos will also make appearances in this series – criminal masterminds, hired henchmen, glamorous Bond Girls, and secret service allies – alongside all-new adventures’.

Corinne Turner, Managing Director of Ian Fleming Publications Ltd, said: ‘We are thrilled that 007 will be revisiting the world of comics, as Fleming’s novels have a long and successful history in this medium, ever since they began to be published as newspaper comic strips in the late fifties. Dynamite are the perfect partners to take on the challenge of continuing this legacy, and we are very much looking forward to working with them’.

Dynamite plans to launch its first James Bond comic books in 2015, making use of a range of mediums, including hard-copy, specialist market, and digital platforms. Comic book reading and collecting has become a major worldwide market in recent years, and has also attracted increased interest from financiers, some of whom have been investing their money into superheroes rather than conventional stocks.

The first comic strips involving Ian Fleming’s James Bond were published by the British Daily Express newspaper from mid-1958 onwards, starting with Casino Royale, which was adapted by the writer Anthony Hearne and translated into visual form by graphic artist John McLusky.

It took about ten years for the Express to serialise all the Fleming novels and short stories and, increasingly, as the Fleming material was used up, original non-Fleming material was gradually inserted to extend and ‘liven up’ some of the shorter stories. As well as an adaptation of Kingsley Amis’s Colonel Sun, there then followed a round of ‘new’ Bond aventures.

The Daily Express serialisation of Dr. No, which appeared in the newspaper from May to October, 1960, and was drawn by McLusky, is said to have been closely used by the production team on the first Sean Connery James Bond movie. Some of the storyboarded scenes for the film do bear a striking similarity to some of the scenes drawn by McLusky. When he was interviewed on stage at a JBIFC convention in the early 1980s, McLusky was evidently very proud of this, acknowledging that, in his own way, he had played a role in translating Bond from small page to big screen.