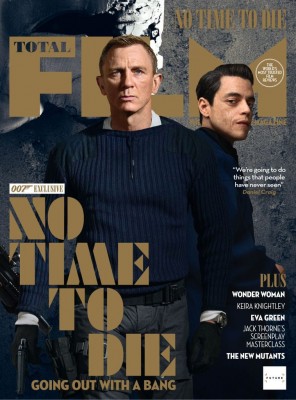 All time high. The new March, 2020, edition of the UK’s best-selling movie magazine Total Film contains a glossy celebration of the new 007 movie No Time To Die, now due to hit cinemas later this year.

With a choice of two different front-covers, the magazine also comes with a set of 5 collectible A4 art cards, each one designed to celebrate one of Daniel Craig’s five 007 thrillers. The magazine is a great purchase for dedicated collectors of James Bond printed magazines. Inside, readers are given extensive coverage of the 25th entry in the EON series with an article entitled ‘Bond Farewell’, together with some separate analysis of each of the five Craig movies and a brief guide on how to make Bond’s perfect martini drink.

For the ‘Bond Farewell’ article, Craig was interviewed by the magazine in a New York hotel, and conceded that – after Spectre – he had no intention of coming back as Bond.

He explained: ‘I thought I probably was physically not capable of doing another. For me, it was very cut and dried that I wasn’t coming back’. However, Bond producers Barbara Broccoli and Michael G. Wilson waited for nearly two years before approaching Daniel again for one final mission. They started talking about it and Craig came round to the idea that there might be a story that needed to be finished. Indeed, as Total Film notes, for Craig, ‘the opportunity to explore a different, deeper side of Bond’ was a key reason to come back.

With contributions from screenwriters Purvis and Wade, director Cary Fukunaga, and other key members of the cast, the magazine also has some eye-catching and glossy stills from the movie. Reassuringly, despite various silly social media rumours that this will be the last 007 movie, Fukunaga confirms that the credits will say ‘Bond will return’.

The March, 2020, edition of Total Film is on sale in UK retailers now, priced £5.99. No Time To Die will be released in November, 2020. Watch this space for further news as it develops. You know the name, and you know the number.