The new September, 2021, issue of the UK’s best-selling film magazine Total Film includes 6 glossy pages of coverage of the new James Bond adventure, No Time To Die (NTTD), which hits British cinemas on 30th September. Bond magazine collectors will be more than pleased!

The article, penned by James Mottram with additional reporting by Jordan Farley, is entitled ‘Holding Out For A Hero’, and notes with deep satisfaction that – after multiple delays – Daniel Craig’s final turn as 007 is heading to our cinemas, bringing his tenure as Ian Fleming’s iconic secret agent ‘to a spectacular close’. The magazine asks whether it is: ‘The end of an era? Or the start of something new?’

The article contains some useful background context on the thinking of the director and producers when it came to the horrible impact of Covid-19, the ‘agonsising’ decisions to delay the movie’s release, and the huge dilemmas faced by EON. Indeed, many film-makers more generally faced very similar challenges.

On the very difficult decision to delay the release of NTTD the first time round, Michael G. Wilson is quoted as saying:’ I think it was pretty clear that we had to do it and that other people would do it. It was inevitable’.

Further postponements added to the frustration of producers and fans alike, as the Covid pandemic impacted its deathly waves across the globe. A lot is now riding on this autumn’s release. So, third time lucky? According to Total Film, Bond producer Barbara Broccoli commented: ‘We just can’t wait for the audience to see the movie. It’s been so long since we had it completed. And we just hope that people love it as much as we love it’.

Some interesting points emerge during the course of the Total Film coverage. As we all know, NTTD sees the return of Blofeld (Christoph Waltz), as well as a new villain in the form of Safin (played by Rami Malek). Two major villains in one movie (asked Total Film)? Malek responded to the magazine: ‘When it’s Daniel’s final film and the 25th instalment, you’re going to throw everything at him – or as much at him as you possibly can’. Daniel himself was also tackled on his decision to return back to the role for one last time, at the age of 51. He was persuaded to take on one more Bond movie to finish a story arc that began with Casino Royale: ‘When you think you can get out, they pull you back in’, he said with a smile, and he kind of knew that NTTD had to happen with him as Bond: ‘There was a story that we hadn’t finished telling’. And we can’t wait to find out how that story unfolds! Welcome back, Mr. Bond. We’ve been expecting you. 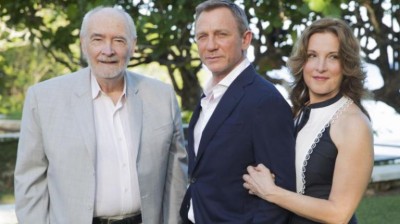 It’s been a long journey. Craig and producers at the original media launch event for NTTD held at Fleming’s ‘Goldeneye’ in Jamaica.